Sir – On February 1, a landslip at Harbury, Warwickshire, closed the Banbury–Leamington railway.

Buses replaced Chiltern and CrossCountry trains. Southampton– Midlands rail freight was diverted. This is the second railway landslip at Harbury within a year. Network Rail may wonder if it checked the site enough last time. 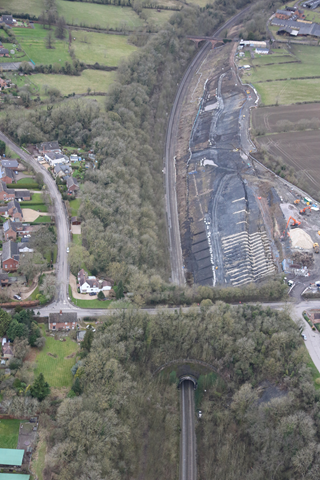 And it raises other questions about the network.

Most of Britain’s railway earthworks are at least 150 years old. Many were built with slopes steeper than is good practice today. However thoroughly Network Rail surveys them, occasional unpredicted failures must be expected.

Britain formerly had enough rail links to divert trains around most disruptions. But many, including fast main lines, were closed in the 1960s.

In a few years, Network Rail will reopen the Bicester–Milton Keynes line. This will not only reconnect Oxford and Bedford but also offer diversions for existing services, including those through Harbury.

The logical next step would be to reopen the disused Great Central (GC) Main Line between Aylesbury and Leicester, increasing capacity between London and the Midlands.

It could have junctions at Rugby, Banbury and with East West Rail to make diversions shorter and easier. It would serve Brackley and pass near Daventry.

Instead the Conservatives, Labour and Lib Dems want HS2.

This will cost far more and have no local stations or junctions. And HS2 would use about 10 miles of the former GC route, blocking the whole line from ever being reopened. It is an open goal for UKIP and the Green Party this May.