HS2 Ltd’s preferred route of the all new high speed rail line between Euston and Birmingham is only the first phase planned.

The Government will also produce details on the proposed “Y” shaped route with branches to Leeds and Liverpool,  splitting off north of Lichfield, currently the most northerly part of the proposed railway.

At present, no detailed maps have been made public of the proposed route of the “Y”.  The intended speed of the trains mean the line will be as straight as possible and this means it is difficult to mitigate around sensitive areas.  However, it is likely to look like this map: 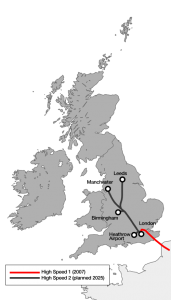 Stop HS2 is concerned that objectors in the south of England  are being deliberately misrepresented as NIMBYs, – “Not In My Back Yard” –  whose objections to HS2 are not based on the fundamental problems with the HS2 project, but merely because of where it passes. This biased portrayal risks encouraging North-South antagonism. We are also extremely worried that people North of Lichfield who are likely to be affected no little or nothing at all about the plans.

We all love our countryside and our international identity as Beautiful Britain. Our countryside is the back yard that belongs to us all.  The extension of HS2 will have as much affect on the environment in the areas it passes through in the north, as it does in the southern part of the route.

The scale of HS2 is not understood by the British public as a whole. We are not talking an ordinary train track here. It will be bigger, faster and more environmentally destructive than any other infrastructure project the country is considering. If it goes ahead it will alter our landscape for ever.

Are we prepared to sacrifice our countryside on a project for which the demand is unproven, which has not had any Environmental Impact Assessment carried out and will cost £34.7 billion pounds of taxpayers money?