Today, Jonathan Edwards MP has launched a campaign calling for fairness for Wales, demanding that Wales should receive £2-4bn for transport projects if HS2 is to go ahead. Back when the second reading of the HS2 Hybrid Bill went through Parliament, the Carmarthenshire MP said that any MP based in Wales voting for HS2 without fair funding for Wales would be committing an act of political betrayal.

The reason for this is that there is a long standing rule, known as the ‘Barnett Formula’, which means that if a project, like HS2 were to be built and only serve England, then the other parts of the UK should get extra direct funding from the UK Treasury. However, the Westminster Government has always maintained that HS2 is a UK-wide project, despite the fact that London, Birmingham, Nottingham, Sheffield, Leeds, Manchester and even Crewe are definitely in Enlgand. 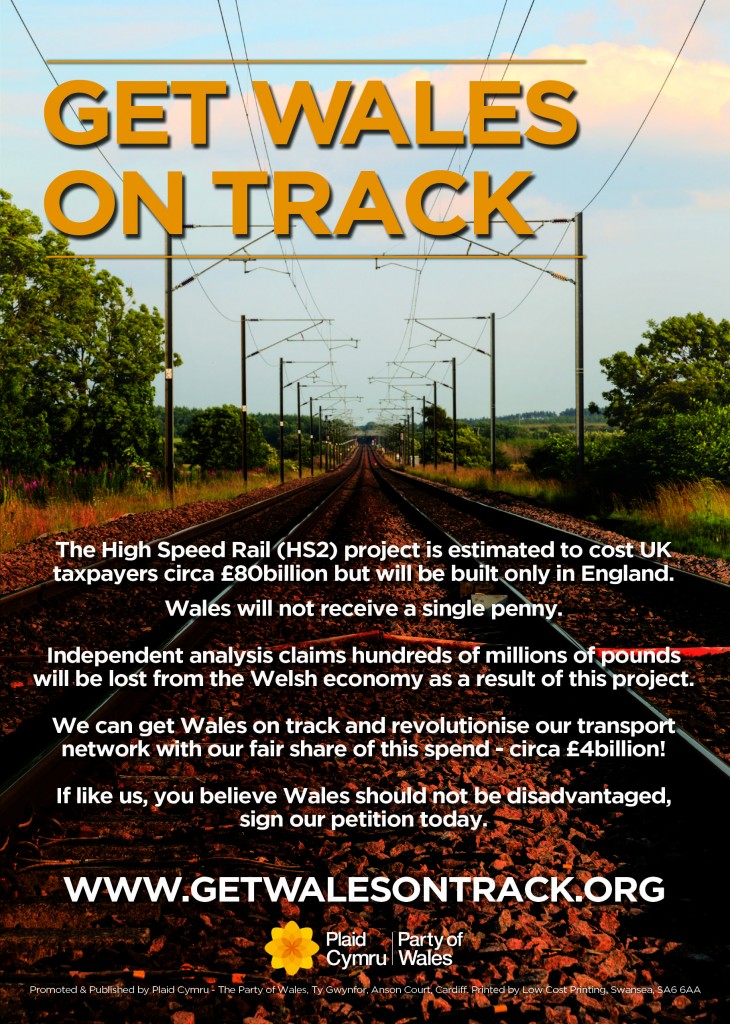 While HS2 will not serve Wales at all, on launching his HS2 Plus report, Sir David Higgins said that if his ‘Crewe Hub’ proposal went ahead, there would be a direct link to Wrexham, which he seemed to think meant Wales would be served by HS2, and as a result the Barnett Consequential, which would be 5.79% of the eventual total cost of HS2 would not need to be paid. If HS2 were to be determined an ‘England Only’ project, then Barnett consequentials for Northern Ireland and Scotland would be 3.45% and 10.03% respectively on the latest set of figures based on 2011-14 populations (*new figures were approved in the 2013 Spending Review, but do not seem to have been published).

You might have been excused for thinking the whole idea of whether or not Wales and Northern Ireland (with the question of Scotland being in part dependent on the result of next months independence referendum) should get extra money under Barnett formula had been all sorted out. Last October, there was a rather bizarre “Have they? Haven’t they?” incident when Welsh Treasury Minister Jane Hutt AM (Labour) claimed Wales had received £84 million as a result of spending which had already taken place on HS2. The following day, the UK Treasury said this was wrong, but the day after admitted they had paid the money, but that it was a mistake and did not create a precedent!

Edwards, who stated today that the Westminster parties can only offer different types of austerity, has been keen to point to MPs of other parties who have voted for HS2, despite the infamous KPMG report showing Wales would lose out economically from HS2. The sections of the report, which were unseen until they were obtained under FOI legislation showed potential annual economic losses for Wales as a result of HS2 for: Cardiff (£70.06m), Carmarthenshire (£12.14m), Conwy (£9.74), Gwynned (£3.21m), Monmouthshire (£8.44m), Neath Port Talbot (£6.15m), Newport (£36.42m), Pembrokeshire (£9.38m), Powys (£5.62m), South Wales Central (£28.37m), South Wales East (£18.16m) & Vale of Glamorgan (£7.07m). Oddly enough, the KPMG report seemed to forget that Northern Ireland exists, with there being no figures relating to the province.

Given all this, the position of Plaid Cymru is completely understandable, that they will continue not to support HS2 unless the requirements of the Barnett formula are enforced. Whether the parties in Northern Ireland and the SNP, if Scotland chooses to remain part of the UK follow suit, remains to be seen. Whilst it may seem clear in terms of where HS2 will physically be built that it is an ‘England only’ project, ‘classic compatible’ trains are due to run on to Scotland, reducing journey times to some English cities. As such, the UK Government will argue there is no case for Barnett money to be paid to Scotland, as direct trains from Euston running to the central belt with lower journey times is certainly a better argument to say the Scots benefit, than saying the Welsh do because they could change at Crewe to get to Wrexham.

Taking the official cost of 50.1bn HS2, payouts for Wales and Northern Ireland would increase the cost of the project by £4.6bn. Including Scotland would cost £5bn, meaning a total Barnet consequential of £9.65bn*, putting the overall current official cost at £59.75bn.

Plaid Cymru have been using the £80bn estimate from the Institute of Economic Affairs, which given the fact the official costs are still quoted on 2011 prices is not an unreasonable thing to do, and if full Barnett Consequentials were added to this figure*, it would put the overall cost of HS2 at £95.41bn (£4.6bn for Wales, £2.8bn for Northern Ireland, and £8bn for Scotland).

“For over four years, Plaid Cymru has fought for a fair share for Wales from spending on the England-only HS2 project.

“Plaid Cymru is the party for all of Wales. Unlike the Labour Welsh Government who have taken the reckless decision to spend nearly £1bn on a 9 mile stretch of the M4, we recognise that roads and railways in all corners of our nation are in need of investment.

“Despite independent research showing that HS2 will have a devastating impact on the South Wales economy, Labour, Conservative and Liberal Democrat MPs from Wales have voted in favour of this project.

“I now call on the people of Wales to join us in sending a message to the Westminster elite that our nation will no longer settle for crumbs from the Westminster table. Whether by writing to their MP, visiting the campaign website to sign our petition, or completing a pledge card – every small step will help force a big change.

“The financial decisions on HS2 will be made in the next Comprehensive Spending Review which will take place in the early years of the next Westminster Parliament. The run-up to the General Election is the only opportunity for the people of Wales to ensure that those elected to serve our communities after next May will not support public spending on HS2 unless our nation receives a fair share.”