Mr Robert Syms MP, the Chair of the HS2 Hybrid Bill Committee said that he thinks that his committee may well not get through all the petitions on HS2 within two years. Mr Syms made the comments during the first of a series of site visits along the HS2 route, which was scheduled to cover sites in Birmingham, Water Orton, Gilson and Kingsbury.  Mr Syms said that the visits were important as they would allow the committee to be able to make better judgements when weighing up arguments, telling BBC Coventry and Warwickshire: 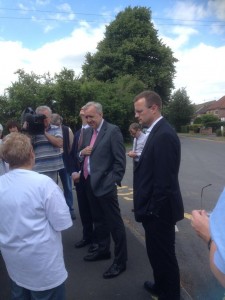 “All the sites are important, they are all going to have a very big impact, we all realise that and I think it’s very important that we take a little bit more time when we are having a look around.”

He also made it clear that the committee are more than willing to talk to residents on their visits, saying:

“It will be possible for some of the local residents to talk to us today if they come out and make themselves known, if they see us around, then knowing Midlanders as I do that they will not be slow to come forward with their views.”

Yesterday was the first site visit, with a full itinerary published on the committee website a fortnight in advance. There will not be any further visits until after the committee return to Parliament in September.

“I think we’ll be lucky to get through the petitions in two years. It really depends on whether we can group the petitions and some of the changes that we might make, because many of the petitions are dependent on the decisions that the committee might make. We intend to deal with it as quickly as we can.”

Both interviews are below.