Now the HS2 Hybrid Bill has passed second reading, the petitioning period has started, and you have until 23rd May to get in your petition (16th for businesses and some councils). We have produced guidance on how to do this, and please don’t leave it to the last minute!!

When you have submitted your petition, you will have the right to be heard by a committee of six MPs, and with that in mind, we thought it’d be an idea to let you know what they think of HS2. Being off-route MPs, you might not be surprised to hear that in the main, they haven’t said a lot about HS2, but with most of what they have said, you may be pleasantly surprised!

Although the press, at the time of the Public Accounts Committee report in September 2013, ran stories saying that all the Bolton MPs thought HS2 is a great idea, reading the full statement Yasmin Qureshi put on her website, she was clearly more ambivalent, saying:

“The case for HS2 has been set out showing the economic benefits for the North West and consequently Bolton also.  However, I appreciate there are those who have concerns that the plans are not value for money. These concerns should be addressed objectively and investigated to clarify whether they have any merit. When the Government is planning on committing over£42 billion on a project, we should be assured that it is going to provide the economic benefits they state it will bring to Bolton.” 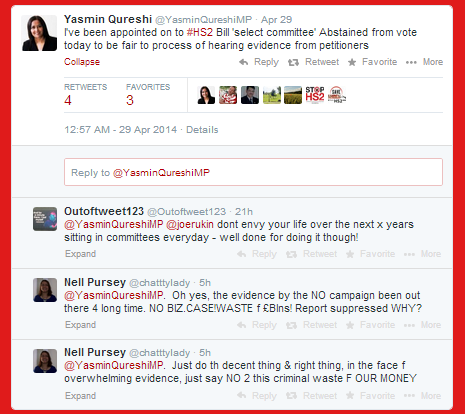 Yasmin Qureshi tweets about not voting on HS2

“The Public Accounts Committee and others have raised some serious issues.  It’s important that the Department for Transport and the Secretary of State address these concerns fully in order that people can have confidence in the HS2 project.  There needs to be clarity and transparency over value for money and the benefits to the rest of the country, not just London.”

“I particularly share the concerns about the amount of money that some have estimated will be spent on consultancy fees for the project, possibly up to £500m by 2016.  It is vital that the Department keeps a tight rein on this if it is to avoid criticism over its management of HS2.”

She is also a prolific tweeter, and has said that she does not see going against the whip as rebelling – just voting differently from her party!

Comments from Henry Bellingham come from October 2013, and were made in respect to the KPMG report which suggested that economic output in West Norfolk would be the fifth worst affected in the country, down by £56million per year.

He said: “I have always been fairly sceptical about HS2. I am not against progress or modern railways as we have to move to the future. My concern is the massive cost of HS2. The cost has gone up to £50 billion and we will suffer because of it.”

“There are improvements we need locally – £40million would give us new platforms, rolling stock and signalling. That is one per cent of the total cost of HS2. The report indicates that as well as benefits to the areas that the link is going to, there will be other areas that will lose out.”

At the time of the Paving Bill in October 31st Oct 2013, just eight months after he joined the commons, Mike Thornton argued that HS2 would benefit the country as a whole, not just the cities directly served by it, saying:

“Surely it’s clear that a line that improves north-south links, and I would include Scotland in that, would at the same time improve and grow the economy of the whole United Kingdom.”

Peter Bottomley is about the only MP on the committee who seems to have said nothing in relation to HS2. The nearest he has come to expressing any form of opinion on HS2 was to support an amendment to from Tim Yeo in June 2013, asking for targets for carbon cuts.

At the time The Guardian reported;

On the eve of what is expected to be an energy policy debate in parliament, the former Tory minister Tim Yeo told the Guardian that the billions to be sunk into the north-south high-speed rail project would not lead to lower emissions if the UK went on using fossil fuels to generate electricity.

Yeo, who is now chair of the energy and climate select committee, said: “This strategy will only work if the extra electricity [for HS2] is generated by low-carbon technologies. If parliament fails to set the electricity system on a low carbon pathway by 2030, we could end up with a grid excessively dependent on gas – and the anticipated carbon benefits of electric cars and HS2 would evaporate.”

Judging by his past statements, Ian Mearns would almost certainly have voted against the HS2 Hybrid Bill, if he wasn’t forced to abstain by being on the petitioning committee. Here’s an interview he did with local journalists Reality Swipe. Don’t blink, or you will miss the fact they nicked the clip of him in The Commons from our youtube channel!

The day after the Hybrid Bill 2nd Reading, Mearns told his local paper that the vote could mean North East residents are treated as second class citizens.

While he hasn’t said a great deal about HS2, Robert Syms is the one MP on the committee who has experience of dealing with HS2 Ltd. Not long after being sacked over the phone by David Cameron as a whip, he sat on the House of Commons Standing Orders Committee which voted to extend the deadline for the Environmental Statement consultation. He only spoke twice, but it’s hard to think that given the quality of the exchange he was involved in at the hearing that he was particularly impressed with HS2 Ltd.

The discussion below was about the delivery of compulsory purchase notices.

MR WALKER: So what was the deadline for serving these notices?

MR WALKER: 5 December. And you sent them out on what day?

ALISON GORLOV: Between the 25th and the 27th.

MR WALKER: Would it have been possible to have sent them any earlier?

ALISON GORLOV: Well, it wasn’t, as it happens, but it would not have made any difference, because we would have sent them in exactly the same way we actually did. It is to be expected that the ones where there were incorrect addresses, which are the ones I think one would say, possibly, were not properly served, would have come back anyway.

MR WALKER: Why were the addresses incorrect? You said it was the Post Office, not formatting them properly or reading them.

ALISON GORLOV: For some of them, the formatting was not what we would conventionally use in this country, and when they got the formatting as we would do it, the postal service simply didn’t recognise it.

MR WALKER: Who sent out the notices, though? Who sent them out?

ALISON GORLOV: They formatted the addresses in a way that didn’t suit Singapore, I think it was—.

CHAIR: I was just going to say, you are suggesting they were done in another country, hence why they were not compatible with what the Royal Mail use.

ALISON GORLOV: That seems to have been the position. That is correct, isn’t it, Tim? Yes, I am being told that is indeed correct.

CHAIR: So we used Singapore, who didn’t know the format of Royal Mail, hence that caused the problem.

ALISON GORLOV: If that is what caused the problem, my suspicion is that it was something like a mechanical sorting service, and they couldn’t cope with it.

MR WALKER: So it was the Post Office’s fault?

ALISON GORLOV: Well, arguably we ought to have known the layout—

MR WALKER: It was the lorry driver’s fault previously, and now it’s the Post Office’s fault.

MR WALKER: Who is responsible for getting addresses right when you send a letter to someone saying, “We are going to compulsorily purchase your house”?

ALISON GORLOV: I am not trying to avoid this. We should have got it right. We were sending a letter to somewhere. We should have made sure that the layout was right. It wasn’t. We got it wrong. We admit that and we re-served.

CHAIR: So you will learn from that?

ALISON GORLOV: We will learn. That is absolutely right, sir.

ALISON GORLOV: Those are my instructions, yes.

MR SYMS: How many were right? What percent?

ALISON GORLOV: My mental arithmetic is not quite up to that.

ALISON GORLOV: 98%. It is a pretty high percentage, isn’t it? We very nearly got it right in percentage terms.

JOHN HEMMING: I think the substantive issue is whether any of these delays mean that anyone who wished to object found themselves unable to object because there was insufficient time. That is really the substantive point.

The full minutes of the Standing Orders Committee hearing are on this link.

Whatsapp
Tags: News
News
15 comments to “What do the Hybrid Bill Committee think of HS2?”