Two days after the Parliamentary Environmental Audit Committee trashed the environmental credentials of HS2, the Independent Assessors of the HS2 Environmental Statement consultation have published their report. Of 21,833 respondents, a total of 87 (0.4%) supported HS2 going ahead, a lower number than the 146 responses (0.7%) which were accidentally sent in blank. 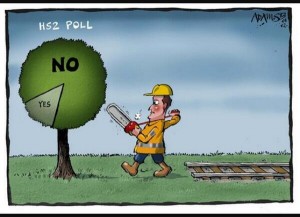 The consultation on the 50,000 page Environmental Statement closed on 27th February, with the analysis only taking a month after starting in the first week of March. Of the responses, over 100 were over 50 pages long, with one being over 800 pages. Sadly, all the report has done has been to collate the number of people who have brought up issues, not the validity of their complaints or suggestions. The report states:

“The Assessor was not required to provide judgement on the quality of the ES itself, such as the value of any community relations along the proposed route, the structure and delivery of the EIA process, or the appropriateness of proposed designs, mitigation and route location decisions.”, and that the results section “Does not evaluate responses on a technical level against assumptions presented in the ES.”

“Yet again we have been given a report on HS2 which seeks to downplay the negative impacts of the project as much as possible. Thousands of people have spent a great deal of time and effort, far more than HS2 Ltd have, in assessing the environmental impacts of HS2, but their grave concerns for the environment have been downgraded to a tick in a box. All that has happened with this report, all MPs will see about genuine environmental concerns before being asked to vote on HS2 this month, is that the number of people who have said words like ‘ecology’, ‘wildlife’, ‘woodland’ or ‘health’ has been totted up. What is the point in having a consultation and asking for opinions if no assessment is made of those options? This report is just another in a long line of HS2 greenwashes.”

“From the start, HS2 Ltd have treated the environmental havoc their project will cause as an inconvenience to be brushed under the carpet. It is absolutely essential that the environment is protected as much as possible from HS2 and not sacrificed to cut costs.”

“Reading through the summary document, it is clear that many ordinary people were not getting the information they needed to respond in a timely manner.  This was not just during the consultation period, but throughout the process.  They pointed out changes to the plans which were introduced for the first time in the Environmental statement, especially where it had a harmful effect on their locality.”

“Many of the criticisms were echoed earlier this week by the Environmental Audit Committee report.  Ordinary people are concerned about the damaging effects of HS2 on wildlife and woodland.”

“What’s really concerning is that the summary form the 50,000 page HS2 Environmental Statement is being given to MPs one day before they break up for the Easter recess, and they will be expected to vote on the second reading the day they get back.  There are many serious environmental problems and questions with HS2, and it is clear the government are trying to race this through.  HS2 will cost £50 billion, and building it will last years, but Members of Parliament, who are supposed to be scrutinising this, simply won’t have a chance to get answers to any issues they raise.”

“HS2 Ltd have persistently ignored environmental concerns at every level in their plans.  From the very basic decisions about speed and route, they have designed a £50 billion railway will have a devastating effect on the environment.  This is not just because the speed means that HS2 will blast through sensitive sites.  Stop HS2 have said from the start that there is no environmental case for HS2.  We call on the Government to recognise the huge environmental damage that HS2 will cause and cancel this project so they can develop sustainable solutions to the country’s transport needs.”