Following the discovery last week that HS2 Ltd had decided to keep the estimated running costs of the project down by ignoring their own forecasts for electricity price increases, a Parliamentary written answer has revealed that the current £50bn cost associated with building HS2 will have to have billions more to be added to it. 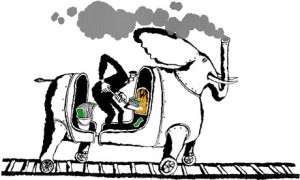 The increase to be added to the current costs of HS2 comes from the news that Danny Alexander has said that the Treasury will, at the next spending review, set out how much money would be paid out under Barnett consequentials due to the building of HS2 after 2015-16. Barnett consequentials relate to money paid to Wales, Northern Ireland and Scotland when the UK Government spends on projects which only affect England.

In October 2013, there was a ‘Have they, haven’t they?’ row when the UK Treasury initially denied a claim from Welsh Assembly finance minister Jane Hutt that Wales had received Barnett consequentials, due spending which has already taken place on HS2, before climbing down and admitting that they would pay Wales £84.5m due to HS2 spending in 2015-16.

Although any money due to Scotland would be dependent on the results of the Independence Referendum, Plaid Cymru have claimed Wales should receive an extra £4bn, whilst Northern Ireland would be in line for £1.3bn.

Stop HS2 Campaign Manager Joe Rukin said:
“The one thing you can rely on with HS2 is that the costs will go up. Last week we learned the running costs have been massaged by predicting electricity prices never go up, we’ve now learned that in June, George Osborne will try and sneak out an escalation in costs due to Barnett consequentials. HS2 spending is simply out of control, and the quicker the project is cancelled and funding diverted to where it is actually needed, the better for everyone.”