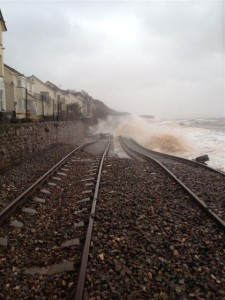 Mr Ben Bradshaw (Exeter) (Lab):The loss of the railway line at Dawlish in the overnight storms is a devastating blow to the economies of Devon and Cornwall. It comes just a year after we lost our railway service for a whole month because of flooding. Does the Prime Minister accept that we, as a country, will have to spend a great deal more investing in the resilience of our transport infrastructure and that we need a Government who are united in their acceptance of, and their determination to do something about, climate change?

The Prime Minister:I agree wholeheartedly with the right hon. Gentleman on a number of points. First, we need to ensure that urgent action is taken to restore the transport links and that is why I will chair Cobra this afternoon, bringing together the problems of the power reductions, the floods and the effect on transport. Secondly, we must ensure that we go on investing in rail schemes and this Government are putting record amounts into such rail schemes. The third point, on which I totally agree with him, is that we need to continue the analysis of the resilience of our infrastructure that is now carried out by the Cabinet Office. Where extra investment and protections are needed, they must be put in place….

Anne Marie Morris (Newton Abbot) (Con):No doubt the Prime Minister saw the scenes of destruction resulting from storm damage in Dawlish in my constituency. Our railway line is out of action, 25 families have been evacuated and one house is about to fall into the sea. Devon and Cornwall feel cut off. Can he confirm that he is taking all the action possible to get transport systems back in action and families back into their homes and, crucially, that he will look at fast-tracking a review of the funding for a breakwater to protect the railway line and residents, which currently cannot be implemented until 2019 because of lack of funding?

The Prime Minister:I am very happy to look at all the suggestions my hon. Friend makes. That is why we are holding the meeting of Cobra this afternoon. Members right across the House will know that that railway line is not only a vital artery for the south-west, but one of the most scenic and beautiful lines anywhere in our country, so what has happened is hugely upsetting and disturbing. We will look at all the options, and we will do so with great urgency….

Andrew George (St Ives) (LD):Following the questions from the right hon. Member for Exeter (Mr Bradshaw) and the hon. Member for Newton Abbot (Anne Marie Morris), it is absolutely true that following the most recent storms, residents in Cornwall have been concerned that England will be completely cut off. In view of that, while MPs from Cornwall and the south-west have been content to support the billions of pounds necessary for HS2 and other transport projects to the north, does the Prime Minister accept that relatively small amounts are now needed to ensure the resilience of the rail line between Penzance and Paddington?
The Prime Minister:I know from personal experience how vital the Penzance to Paddington link is and how many people rely on it, so I am happy to look at this very urgently. Let me repeat something I was trying to say at the beginning of questions about the Bellwin scheme. I know that Cornish Members of Parliament are concerned that now they have a unitary authority, they would need a very big claim before triggering Bellwin. We are sorting that out so that the money and the assistance will be there. On the transport links, it is an urgent requirement to get this right.