Today (December 5th 2012), Chancellor George Osborne announced as part of his Autumn Statement that; “We’ve already set out plans this autumn for a huge investment in rail, and the Transport Secretary will set out in the new year plans to take High Speed 2 to the North West and West Yorkshire.” Previously, the Secretary of State for transport Patrick McLoughlin had said he wanted to ‘crack on’ with plans for HS2 and that the route would be released ‘by the end of the year’, whilst the HS2 Ltd website still stated earlier today that the engagement process on Stage 2 of HS2 would start in ‘Autumn’. The options for routes to Leeds, Manchester and Heathrow were originally provided to previous Secretary of State, Justine Greening, in March 2012.

Currently, there are five ongoing Judicial Reviews against HS2 being heard at the Administrative Court, and campaigners have always been surprised that the Government had planned to announce the route for Stage 2 before these would have been ruled on, which is currently due to happen in January next year. Now it seems that the routes are due to be published after those rulings will have been made.

The announcement was just as much news to campaigners as it was to HS2 Ltd, as Stop HS2 Campaign Coordinator Joe Rukin said;

“After hearing the news, I rang HS2 Ltd to make sure no plans would come out this year. I was told; ‘That’s news to us, we are not aware of that.’, and was asked where I had got my information. I told them that George Osborne had said it in Parliament about an hour and a half earlier, was put on hold and then told ‘No, we can’t comment on that, we haven’t been told. All I can do is suggest you look out on the website.’ The person carried on speaking for a while and then asked if I was still there, to which I replied; ‘Sorry, yes, I’m just trying not to laugh!’, though in the end we were both laughing. I would say I was surprised that no-one had bothered to tell HS2 Ltd that the Chancellor had delayed their project, but nothing surprises me about the complete incompetence surrounding the Government plans for HS2 anymore. In fairness, whilst their website hadn’t been updated since the delay in the announcement made at Conservative Party Conference, they had got the website changed within about half an hour of me ringing them this time.” 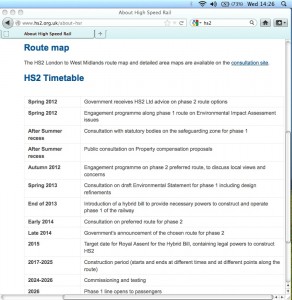 HS2 Ltd website an hour and a half after George Osbourn announced the delay in Stage 2 publication, still showing ‘Autumn 2012’ as the date for the Stage 2 announcement.

“The Government’s further delay in the announcement of the routes to the North can only be explained as an implicit acknowledgement that the DfT case in the judicial reviews is weak. The Government has been sat on the routes since they got them in March and they would look even more foolish than they do now if they were to announce the routes and then weeks after be told they had acted illegally. This delay just prolongs the state of limbo and blight affected communities near the proposed junctions of HS2. It seems unbelievable that two Transport Secretaries are unable to decide on the proposals given to them in March and it shows yet again their total contempt for the affected communities.”

“In October to the Conservative Party Conference, the Secretary of State for Transport said that he wanted to ‘crack on’ with HS2.  Far from cracking on, the plans for HS2 appear to be cracking up.  As a result of this week’s judicial review, huge flaws in the HS2 plans have been uncovered.  Far from being full, as the Department for Transport claim, trains leaving Euston in peak hours are only 52%.  The Heathrow spur will lose 70p of taxpayers money for each pound spent on it.  Earlier this year, it became clear that the government is spending £15 million of taxpayers’ money each month on HS2. The Government shouldn’t plan to announce the second phase of HS2 in the New Year.  They should announce instead the immediate cancellation of HS2 and concentrate on solving the very real economic problems facing the country today.”

The hearing of the five Judicial Reviews is expected to last until Tuesday 11th December, with a ruling to come early in 2013.