This article has been amended from the one published earlier today, as the Department for Transport, whilst being unable to provide breakdowns of the cost of HS2 (Phase 1, Phase 2, and Trains) have now stated the ‘funding envelope’ mentioned in the Spending Review does include the cost of HS2 trains, despite the fact the statement only refers to construction, and normally when talking about the funding envelope, they do not include the cost of rolling stock for HS2. In our defence, it seems a few journalists made the same mistake as we did, and it is all down to an inconsistency in the way Government portray HS2 costs, demostrated by the quote below.

An extract from a speech from Patrick McLoughlin in October 2013. Not only has what he said gone totally out of the window, but it demonstrates why we initially got what was included in the ‘funding envelope’ wrong.

“Construction will begin on HS2 during the Parliament, and the Spending Review confirms a funding envelope of £55.7 billion in 2015 prices, which will deliver HS2 from London to Birmingham by 2026, and to Leeds and Manchester by 2033.”

Up until now, the official cost of the construction of HS2 has been stated as £42.6bn in 2011 prices, with a further £7.5bn added for the cost of trains, so £55.7bn represents an increase of £5.6bn, or 11%. This figure for the overall cost of the HS2 project is almost double the original estimate published in 2010. 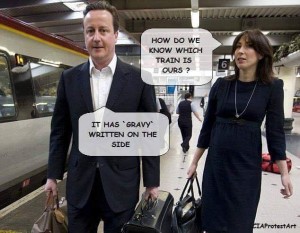 Mr Osborne also said that along with HS2, the Great Western, Trans Pennine and Midland Mainline electrification projects can go ahead. As all of these projects have been beset with serious budget problems, it is likely that the increase in capital spend within the Department for Transport is simply to cover the cost over-runs which have been caused by chronic mismanagement.

Back in July the Trans Pennine and Midland Mainline projects were ‘paused’ by Government due to mismanagement and cost over-runs, only for them to be given the go-ahead in September. However, the costs of these projects is unclear. Just last week the Public Accounts Committee said it was “staggering and unacceptable” that current estimates for Great Western Electrification stand at £2.8bn, against a budget in 2013 of just £874m.

This news comes just a day after it was revealed that 46 members of staff at HS2 Ltd are paid more than the Prime Minister.

“HS2 is abysmal value for money, and the increasingly dogmatic support for this white elephant and its’ spiralling costs is completely unfathomable. An 11% increase in the projected costs for construction is shameful after promises that the costs would be kept under control, but it is just another in a long line of HS2 cost hikes, and there will be more to come.”

“With trains not due to run for over another decade, who knows where the cost of this vanity project will end up and what else will have to be cut to pay for it? A responsible chancellor would be asking serious questions about whether HS2 is really worth it, not chucking more money at a boondoggle which would only benefit the richest in society. This is simply rewarding chronic mismanagement, and signalling that there is no need for budgetary control when it comes to HS2.”

“HS2 is clearly a white elephant.  Transport in the North does need improvement, but it isn’t the links to London which are holding back the economies of the North.  It’s the ability to cross the Pennines, it’s getting into city centres from local towns.  This is where the money needs spending on transport, not on one big showy railway line.”

“The government should make the decision to cancel HS2.  There are far better uses for the money, which will have far better long and short term results. The people in charge of Network Rail when the now-delayed electrification programme was being developed are now in charge of HS2.  They made a mess of that, and now they are making a mess of HS2.”

“Time and again, the government and HS2 Ltd have been overly optimistic about the cost of building HS2.  It’s almost as if they picked a figure for the costs which was just about politically bearable, and then they hope no-one will notice when they increase it.”