The Paving Bill is not an essential part of the HS2 process.

Although the HS2 route was first announced in 2010, the “need” for the Paving Bill only started being mentioned in 2013 – it’s a sign that the promoters of HS2 were going overbudget years before construction started and want more taxpayer cash to build this unnecessary white elephant. 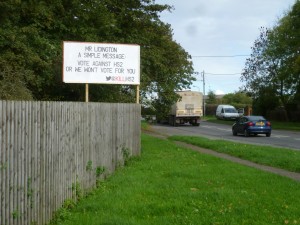 “Vote against HS2 or we won’t vote for you”

The Paving Bill is not needed for compensation.

Costs of land purchase, compensation and surveys were already included in the original budget for HS2. Using cash made available as a result of passing the Paving Bill is a means of taking some of the HS2 costs out of the headline HS2 budget.

The Paving Bill focusses on the wrong needs.

The Paving Bill – or to give it’s full title “High Speed Rail (Preparation) Bill” – gives cash for a specifically high speed railway. With the Secretary of State now saying “speed is irrelevant” and the arguments for HS2 being about capacity on the railway, this bill is trying to solve the wrong problem.

The paving bill is a blank cheque for HS2.

There’s no maximum budget in the Paving Bill.

(We’ll be tweeting about it at @stophs2 and @Penny_Gaines so follow those accounts for the latest in the debate.)

We know Conservative MPs have been heavily ‘whipped’ into voting for this bill, and that Labour MPs who are having doubts have been told to stay away from the vote. In addition some MPs who are against the current HS2 proposal think it is needed for compensation. So we are expecting a rebellion, but not to defeat this bill. However, there is increasing opposition across the country to the HS2 project, so whatever the results of this bill, HS2 is still stoppable, and with your help, we will stop HS2.

PS You’ve still got time to ring your MP and ask him or her to vote against this bill.

Whatsapp
Tags: News
News
One comment to “Some important facts about the Paving Bill”