Peter Delow looks back at the 2011 Stop HS2 convention, and forward to Saturday’s 2013 convention. Originally published on HS2 and the Environment: A meeting of minds. 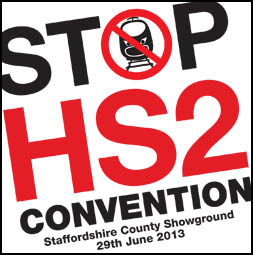 I have very fond memories of the Stop HS2 National Convention that was held just up the road from where I live, at the Stoneleigh Park Exhibition and Conference Centre. It was February 2011, which seems an age ago now, and our action group was little more than half a year old. Despite our inexperience we knew that in a matter of a few days we could expect to be drawn into the five-month process of formulating and submitting a response to the key public consultation on the HS2 proposal, including the route for what we now call Phase 1.

The excellent facilities of the venue seemed to be pretty-well full with punters like myself, giving the place a real buzz; I have seen various estimates of the numbers, ranging from “more than five hundred” to “about seven hundred”. It felt good to be part of such a large gathering of like-minded souls, all wanting to see the demise of the “HS2 white elephant”.

I was amazed at the slick organisation – an indication of just what was possible with the combined talents of the action groups along the line – and even more so in the realisation that much of what happened on the day was down to the dynamism and organisational ability of one individual, Lizzie Williams, who was then the Chairman of Stop HS2.

My only complaint about the day was that there was far too much on offer, and I was called to make some really tough decisions. I really hate having to do that; I have a similar problem with restaurant menus, and always dither and wonder, when I do eventually make a choice, what unknown delights I might be missing. On the day, I opted for the events in the main hall at the start and end of the day, plus two environmental sessions from the seven streams that were on offer in the subsidiary rooms.

Whilst the environmental sessions were extremely useful to me – I started this blogsite up less than a month later – I can’t help but wonder, looking at the programme of events that I still have – whether I made the best choices.

So I am pleased that I am being given another chance, and will be able to pick up some different topics at the new Stop HS2 Convention that will be held on Saturday 29th June 2013. The reason for holding a national convention for the second time is, of course, that the community of those opposed to HS2 has been swollen recently by the announcement of the provisional route for the Phase 2 extensions to Manchester and Leeds. With the travel needs of the newcomers very much in mind, the event has been moved northwards from Warwickshire to the Staffordshire County Showground, which is on the A518 Weston Road about four miles east of Stafford. The hope is that the location will prove a convenient compromise for both Phase 1 and Phase 2 folks, and will be a nexus to unite both.

The Staffordshire County Showground looks to be every bit as well appointed as the Stoneleigh venue that served us so well in 2011. So I am really looking forward to another stimulating and rewarding day, and experiencing the feeling of camaraderie that we should all benefit from.

The organisers promise us “plenty of free parking” and refreshments will be on sale to fortify us. There will be over twenty-five events laid on for our delectation; these, we are promised, will tell us “everything you want to know about case against HS2 and how to oppose it”. If you don’t find that prospect exciting enough, the chance to “meet Ellie the blow-up white elephant” will surely convince you that this is an event that you cannot afford to miss.

A provisional list of the sessions that will be offer indicates that I will again struggle to choose a personal attendance list. One that I will not be able to avoid is “Noise impacts of HS2” because this session will be HS2 and the environment LIVE, given by yours truly. I hope that this will give me the chance to meet some of my readers and, possibly, recruit a few more.

We are all being asked to buy our tickets in advance, in order to avoid the inconvenience of having to queue at the door. Your local action group contacts may be able to provide tickets, but probably the most convenient way is to buy on line.

In order to judge the demand for the sessions that are on offer and to allocate rooms appropriately, the organisers would be obliged if you were to indicate the four workshops that you are most interested in attending using the simple on-line survey form.

I hope to see you there.

email
Tags: News
News
11 comments to “A meeting of minds”