This was originally published as On Second thoughts on Peter Delow’s blog HS2 and the Environment.

In my blog The failings of the brewery entertainments manager (posted 26 Apr 2013) I mentioned that  HS2 Ltd has performed an embarrassing volte-face on the design of HS2’s Euston terminus. I reported that Frank Dobson, Member of Parliament for Holborn and St Pancras, had been quoted by the Independent on Sunday as claiming that the plans “have been massively scaled down after officials discovered they had underbudgeted by 30 to 40 per cent”.

Rumours that had been circulating for a month or so were finally confirmed publicly by HS2 Ltd at a meeting of the Euston Community Forum on 18th April 2013. This ended a period of “behind closed doors” discussions with Camden Council members and others, with HS2 Ltd, at pains to keep its obvious discomfort out of the public eye, resorting to pledging local representatives to keep these discussions confidential. It is good that HS2 Ltd has finally lifted its veil of silence; it wasn’t particularly effective anyway, as the local paper, the Camden New Journal has been keeping us all reasonably abreast of developments despite the attempts at secrecy.

In an embargoed press release that was made public on the day following the Euston Community Forum meeting, HS2 Ltd promotes the plan as “minimising disruption to commuters and residents” and admits that the original plan “would have taken more than a decade” to realise. These two statements are interesting admissions in themselves.

The implicit admission that rebuilding Euston Station as originally proposed would have been “disruptive” is at least a welcome move towards honesty. As I discuss in my blog Sorry we can’t do it because we’re incompetent (posted 5 Feb 2012), the Government’s strategy up to now has been to play down considerably the disruption that a major rebuild will involve, especially when making comparisons with the alternative of upgrading the existing lines.

That we are now being told that the work as originally planned would have occupied more than a decade of construction, is also confirmation of reports by the Camden New Journal that HS2 Ltd has been forced into a rethink as the original plan would not have been completed in time for the scheduled in-service date. Compare “more than a decade” with the original estimate of “seven to eight years” given in the leaflet Euston Station that was published for the 2011 public consultation

The HS2 Ltd press release includes a drawing of the new proposal for Euston Station, shown with the roof removed. 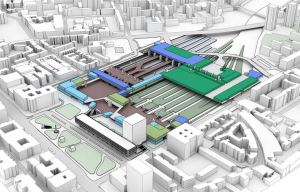 The press release informs us that the original plan “envisaged a complete rebuild of Euston Station, including all existing platforms”. Now we are being told that “most of the benefits for Euston could be achieved without having to knock down and build the entire station”. In fact, the plan appears to be to keep the fabric of the existing building largely intact and retain most of the existing platforms with some additional lengthening. Additional platforms required to accommodate HS2 will be housed in what might uncharitably be described as a “lean-to” added to the western side of the existing station. All in all, the new station will provide twenty-four platforms, the same number as the original plan, but with a different configuration.

We are told that Euston Station will be “revitalised for passengers” by providing “new, improved facilities … in a redeveloped, integrated station with a new, combined concourse and façade”. These facilities will include “a new Underground ticket hall” – no confirmation has been given of whether this will still be “four times larger than the current one … to cater for the increased passenger numbers” as we were originally promised in the Euston Station leaflet.

It is hard to see that a proposal that retains the existing station fabric largely intact can really provide the “high quality, user-friendly terminus” that we are promised in the Euston Station leaflet; even HS2 Ltd is only claiming that the new proposal retains “most of the benefits” of the old scheme, so some things have obviously been sacrificed. Chief amongst these is probably the “residential and business premises, new streets, public spaces and community facilities” that the Euston Station leaflet promises us “could be created above the new platforms”.

It is true that the HS2 Ltd press release promises “potential opportunities for over-station development”, but my understanding is that construction over the existing station building is unlikely to be possible, so any development potential will probably be confined to the area over the new annex, and will be severely constrained as a result.

The realisation that the promises of regeneration coming along with HS2 are largely evaporating has led to some local representatives making statements that appear to support the original proposals. However, I think that the good people of Camden need to tread a little carefully in their dealings with the Government on this issue. In one of his (or perhaps her) excellent blogs, Beleben warns against Camden councillors and others being seen to be in a position of backing the original proposals rather than “articulating the fact that, annexe or rebuild, HS2 means years of disruption and no benefit for the average Camden resident”.

In reading the reactions quoted in the reports in the Camden New Journal, I fear there is a real danger that some local representatives are falling into this trap. No other than the local Member of Parliament, Frank Dobson, appears to be a case in point. He is quoted in the March newspaper article as saying:

“They are now proposing changes that will remove every one of the benefits from the locality from HS2 coming to Euston. The housing and jobs disappear. The new station disappears. All gone.”

However, I am pleased to see that at least one councillor, Paul Braithwaite, appears to be avoiding this pitfall. Supported by the Pan Camden HS2 Alliance, Cllr Braithwaite is promoting a proposal for a rebuilt Euson Station based upon a “double decking downwards”, or DDD, concept. This idea, which I first mentioned in my blog … and suggestions for how to avoid them (posted 14 Jul 2012), is described by its promoters as one which will “reduce the disruption to west Euston while opening up around one-third of the existing station for much-needed redevelopment”.

Since HS2 Ltd appears to have run out of sensible ideas for the redevelopment of Euston Station, perhaps the Government should pay more attention to the possibilities of this proposal from the local community.

It seems to me that this Euston debacle is the first sign that the wheels may be coming off Mr Cameron’s shiny new train set. Surely, HS2 is meant to be a prestige project; and yet it now looks likely that its London terminus is set to be what one Camden councillor has described as a “cheapskate fraud against the citizens of Camden”, rather than the landmark architectural statement that such a project demands. Ministers have been keen to evoke the spirit of the Victorians when doing the “vision thing” about HS2. I ask you, would the Victorians have resorted to such a penny-pinching option as now seems to be being proposed. I think not!