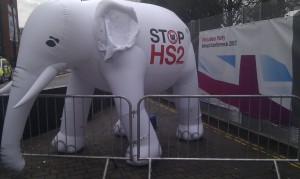 Campaigners were shocked when Tony Blairs former spin doctor, Andrew Adonis, told astonished delegates at a fringe meeting discussing engagement and inclusivity that the Stop HS2 campaign should not be allowed a stand at the Labour party conference.

‘The unelected peer and then transport Secretary announced HS2 in March 2010, a month before the next general election needed to be called – an election he did not have to fight.

‘We are at the Labour Party Conference to tell ordinary Labour supporters the many problems with HS2, some of which stem from the attitudes of senior HS2 staff appointed by Adonis  when he set up the government funded HS2 quango.
‘Lord Adonis is clearly worried that his hastily put together vanity project – which will cost the country £33billion – is likely to hit the buffers due to the tireless campaigning from the grassroots.
Fran Heron lives in social housing in Camden said;’He calls himself Baron of Camden Town, but his vanity project will wreck communities in Camden, like the Regent’s Park estate.’

‘The  Labour Party is using the conference to promote their new policy formulation mechanisms which they say will include an emphasis on community engagement and be a model of participative democracy, but apparently not everyone in the policy team is on board with that. or perhaps it only applies to policies other than HS2’

“It seems participation and engagement is OK, but only if you agree with what Lord Adonis says. He set up up Hs2 Ltd and his attitude still permeates everything they do. All of their supposed attempts at engagement have been pure window dressing with no intention of listening to anything, no matter how well thought out and researched, which is critical of his pet project. If HS2 was such a great idea, he wouldn’t be worried about us.”