This is a guest article by Madeleine Wahlberg, who is Nantes for the 2nd European Forum Against “les Grands Projets Inutiles Imposés” (‘Useless Imposed Mega-Projects’) 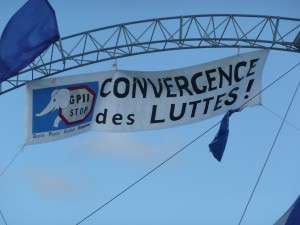 Where to begin? Well the two photos show you how Ellie has spread her benign influence over the wider cause – even making the local paper I believe – and how hard your delegates have been working the crowd. Things that seem to have lit a light with others include that the cost of HS2 is equivalent to Cameron handing 6 euros each to every man, woman and child on the planet … (Y = €42.3 billion; world population = 7 billion). Sometimes the sessions have developed a comic refrain with each HSR project ‘upping’ the previous statement on how much each costs per mile (Italy is the current winner); how extensively the ‘facts’ to support the case for HSR have been distorted by governments; how ludicrous the business case is etc. What we all realise is how many common negative factors there are across the various HSR projects. 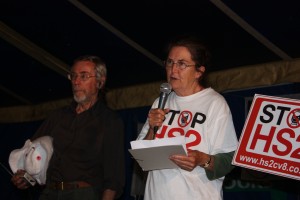 Bankwatch will be testing the European Investment Bank on what they know about the real business cases for these various HSR schemes. Morocco is a particularly extreme case: with 40% illiteracy, and a huge shortage of schools, sewerage systems, and hospitals – guess what? Yes, they are having a €25 Billion HSR imposed on them. Unsurprisingly, their campaign hardly touches on the environmental damage from HSR – their focus is on the lack of social justice that will spend precious resources in such a wasteful way, given the huge basic needs in the country. The HSR scheme will only be used by tourists – VERY few Moroccans will have the money for a ticket but will there really be 6 million tourists to fill the projected passenger numbers? Moroccans will be paying for this train that they can’t use through debt over years and years…

We also heard about how the French Audit commission has done a report that is extremely critical of large French projects like the TGV. So we know that the French Government is saying that they have ’made a mistake’ in their push for HSR. The head of the French railway company has said so; the French Audit Commission has said so; and certainly the wider French public know how the concentration of investment in a few TGV lines has lead to the decay of their classic and commuter lines. If we stand up in a meeting and say that the French TGV is held up as a shining example of success by the UK government, the room collapses in laughter and hoots of derision. However, even the French still have problems with some of their politicians saying that HSR is more important than hospitals.