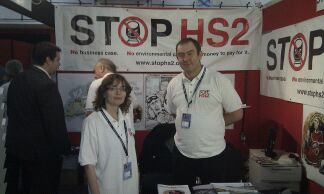 It’s been a busy and exceptionally important month for the campaign in September, and it’s not over yet. Following on from lobbying at Plaid Cymru Conference, turning up at Green Party conference to say ‘thanks for the support’, addressing UKIP conference and holding a fringe with the Lib-Dems, this week it’s been full-on at Labour Party Conference, with Conservative Party Conference just about to start. Coming out of Labour Conference one thing was quite clear. Although attempting to access democracy this way can prove to be expensive and will leave the campaign coffers empty, in terms of what was achieved it was well worth it.

Being located just 2 stalls away from the Campaign for HS2, there had been some trepidation about how that would work out. Right at the start that became reasonably clear, as the first question asked by almost everyone approaching the stall from the right hand side on day one asked how we were funded. “Purely by public donations” was the straight answer. Besides recent contributions from action groups to cover the cost of party conference stand and the help of a couple of AGs in setting up the National Convention in Stoneleigh, Stop HS2 has never received a cheque for more than £200. “Shaking tins on stalls, selling bags, car stickers, badges, t-shirts and the like, wine tasting nights, raffles, quizzes, that sort of thing. This weekend I’m going to a barn dance and the weekend after it’s a fish and chip night. It’s all genuine grassroots fundraising.” 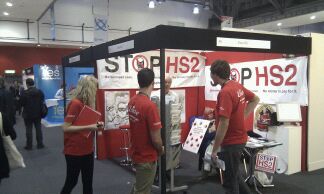 Stop HS2 stand reasonably quiet for once. The neighbours empty as usual!

Seemingly setting out to attack our campaign with a subtext that we were all rich landowning tory nimbies seemed quite a bizarre tactic, as anyone with an ounce of sense could see that one was going to spectacularly backfire. All you had to do was look at the two stands to see which campaign was the one with the money and that clearly wasn’t us. The Yes campaign had a bespoke stall, one that had clearly cost a pretty penny with a metal floor, built-in desk and a curved back wall which had a lockable storage area and built in TV. The video was running footage of the campaign at Westminster, with Pete Waterman as the ‘star’ and of course lots of pictures of their campaign bus, the one that has ‘Siemens’ written on the side. When we told people the bus had Siemens written on the side (Siemens also held a fringe event on why HS2 should be built), it did help that we could tell people to go and watch the video! The news of Siemens coming in four times over budget on the new passport computer system breaking on the first day of conference probably also helped as Labour wanted the promote the message that they would cut the influence of those with vested interests. 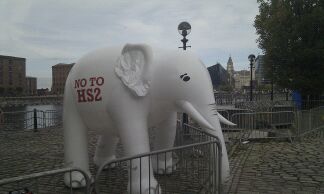 The Stop HS2 stand was a stark contrast. No storage area meant the back was bedecked with boxes of leaflets. The stall was decorated with banners and cartoons, the leaflet holder had been rescued before it ended up in a skip and the pedestal which the screen running the power point presentation was on had come from the tip. They had wanted £2 for it, but I knocked them down to £1.50. Most importantly, we had our materials crammed with information, as were our heads. Unlike the Yes campaign we saw little point having materials and not proactively trying to give them out. The true measure is that whenever you looked, we were busy. Even the polo-shirts, or complete lack of this sort of tactic from anyone else at the conference besides Labour Students, made the team exceptionally visible and noticeable, as did leafleting everyone going in on the first full day. Having to go to cafe outside to upload an article, you could hear three conversations spring up about HS2, just because of people reading a polo shirt. We had a dedicated, well informed, well motivated team and we got the message out, when there were simply so many people still who knew nothing about high speed rail, and it wasn’t just about the stall, there were dozens of opportunities to raise points and speak to people at fringe meetings, which were grabbed with both hands. 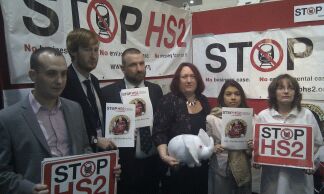 In terms of the actual impact, we achieved far more than we would have hoped to. We have a far better understanding of what is happening internally in the Labour Party on the issue of high speed rail, spoke to various MPs and councillors who repeatedly said “I didn’t know that”, sparked more debate within rail unions, were told to “keep at it” by a high up executive for a rail operator, who admitted they still hadn’t been convinced, and we even got a cheque from a bloke from Manchester. Obviously at this point in time we can’t spill the beans online about all of this, but I suppose the best example was the ASLEF fringe meeting. You will remember that train drivers union ASLEF sent postcards to all its members, asking them to respond favourably to the HS2 consultation. Well at their fringe meeting, one of their lot got up and said that he had changed his mind on HS2. Now that’s a result. Hopefully we can produce similar results at Conservative Conference.

Whatsapp
Tags: News
News
One comment to “Labour Conference over, next stop The Tories”