Hero Granger-Taylor is taking legal action against HS2 Ltd for its ‘Three Tunnels’ design into Euston, and urgently needs funding to pay for the hearing on Thursday 16th January: donations can be made through the CrowdJustice site:
https://www.crowdjustice.com/case/hs2accountability/

Hero first made a claim for judicial review on 14 October 2019 after she had received an engineer’s report that revealed planned tunnels close to her home could cause a huge 10-metre high, 120-year-old wall to collapse into the new tunnels below or onto the existing West Coast main line. The collapse of such a structure could be “catastrophic” and risk “the personal safety of hundreds of rail travellers and residents”, according to chartered civil engineer Colin Elliff, author of the report.

The Three Tunnels design for HS2 in the Euston Approaches is not formally approved. The design approved by Parliament in 2017 included train tracks inside an open box within the Camden Cutting, but that design was dropped once permission had been granted. It was replaced by the current design for tracks to run underground in three nine metre diameter tunnels, beneath an historic area of Camden, North London.

Diagrams that Hero has seen reveal the closest tunnel would run in line with the retaining wall above and be as little as one and half metres below its foundations. 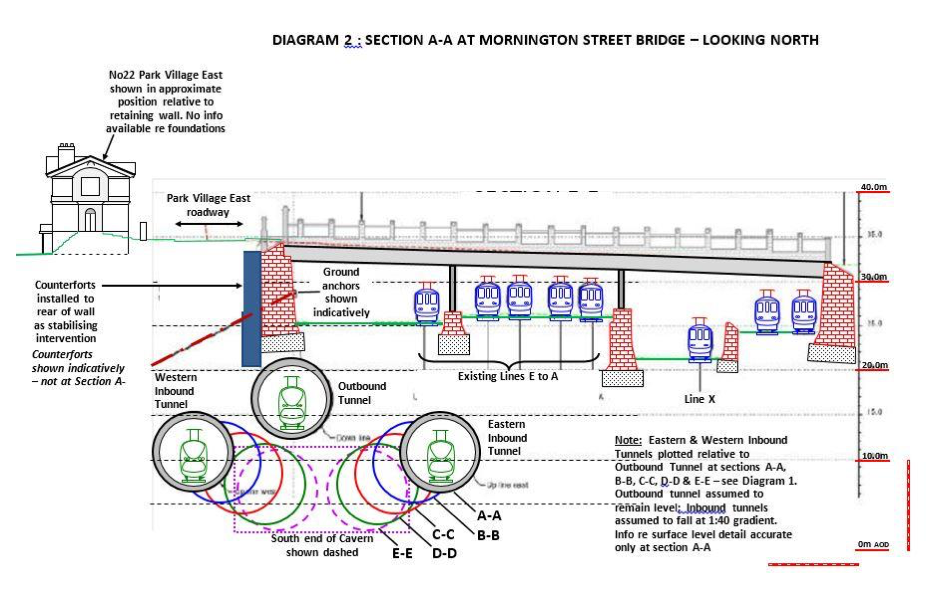 On 27 November we learned that my initial application had been turned down. The Planning Division of the High Court had evidently accepted HS2 Ltd’s defence, that I have ‘alternative remedies’ and that ‘there are a number of features of the Phase 1 scheme within the Euston Approaches which will require Schedule 17 consents’. But I believe that HS2 Ltd was wrong to imply that I could influence the basic elements of the design now about to be built. They had previously written in a Freedom of Information response that the new design for the railway did not itself need any additional consent beyond the February 2017 Act and that that an eventual Schedule 17 application to Camden would only cover ‘the architectural treatment of above ground structures’.

On this basis, I decided to renew my application and have now been granted an oral hearing very soon, at the High Court in the Strand on Thursday 16 January 2020 (time not yet known – please see https://www.crowdjustice.com/case/hs2accountability/ after 3 pm on 15 January).

Because a renewed application must be heard in court, and cannot any longer be decided on documents submitted, it involves considerable additional legal fees. I am therefore trying urgently to raise the remaining £12,000 or so of my original CrowdJustice stretch target of £21,500 (we used up about
£7,500 of this making the original application). If permission is granted on 16 January for a full hearing it may not be necessary to go on to this next stage: HS2 Ltd may decide that to continue to hold back information of such importance is no longer a tenable position.

Like me, you may be hopeful that our new Government will decide against building the whole of HS2. But the current indications are that no decision will be made before February. There is a major danger that, rather than cancelling it, the Government will put HS2 Phase 1 ‘on ice’. Such a decision would result in many more years of uncertainty and blight for all the areas through which HS2 Phase 1 is due to pass. If I and my lawyers are able to show on 16 January that there is no workable design for the Euston end this would add weight to the case for outright cancellation.

Any money you feel able to contribute will be greatly appreciated. Small or large donations can be made through the CrowdJustice site: https://www.crowdjustice.com/case/hs2accountability/