The Channel Tunnel Rail Link – now called HS1 – was meant to benefit people all over Kent. However, yesterday in the Telegraph, Andrew Gilligan described the miserable experience of Kent commuters and wondered whether HS2 will also be a let down for commuters.

The 1998 brochure I mentioned previously said cheerily that “new, much faster trains would be able to run between Kent and St Pancras”.

However, as yesterday’s Telegraph article described, numerous Kent commuters find nothing cheery about the train services they now endure. John Nicholson said graphically “High-speed rail has been a total nightmare for us.” His train journey to work has increased from 70 minutes to 90 minutes.

While the CTRL brochure does not suggest train times from Herne Bay, it does give a figure for the service from Margate, a seaside resort a few miles further along the coast from Herne Bay. After HS1 was built, their trains to London, in the new high speed world, was supposed to be 80 minutes.

The Network Rail website will produce personalised time table for specific journeys.  So I created one for morning services between Margate and London. 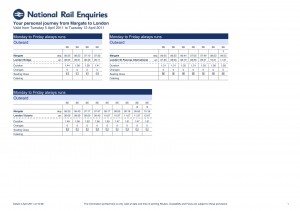 The results are clear. The very fastest morning service is 88 minutes, 10% longer then the glossy brochure said. But it doesn’t get to London until 10.21: no good for commuters.

The rush-hour services from Margate to St Pancras take between 91 minutes and 95 minutes. These services are up to 20% longer then the Channel Tunnel Rail Link brochure said they would be.

Like the Telegraph says”Instead of speculating about the high-speed future, we can go and see it for ourselves. For any supporter of high-speed rail, it should be a sobering experience.”