With the Oakervee review on HS2 ongoing, many have noticed that despite (or because) it is supposed to be a ‘go/no-go’ review, HS2 Ltd actually seem to be accelerating aspects of their work, such as the fact they have issued at least 2,200 ‘temporary’ possession orders, which equates to taking an area which equates to the footprint of the city of York, before the land that they have actually had the decency to pay for has been taken into account. 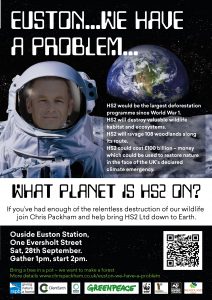 Last week it was the issue of Ancient Woodland that was in the spotlight, with it being pointed out that if there is a genuine chance that HS2 could be cancelled, then there should be no irreversible damage to irreplaceable habitats, such as ancient woodland. Seemingly, transport secretary Grant Shapps agreed, saying:

“There is no sense in hiding the challenges HS2 faces, or masking the difficult decisions that need to be taken.”

“So, as Douglas Oakervee’s review continues, we must take a sensible approach and recognise that some works simply cannot be undone later.”

“Having listened to the concerns of affected residents and Parliamentary colleagues, I have ordered HS2 Ltd to consider what works affecting ancient woodland clearances can be delayed for the duration of the review. This ensures we avoid irreversible decisions without major impacts on cost and schedule. HS2 may be a complex project overall, but I think this request is just common sense.”

Unfortunately, the new transport secretary was naïve enough o give HS2 Ltd a get-out clause, that they could continue with their treemageddon if waiting would add significant cost or delay to the project – an odd position to take the week after he admitted the project was £20-30bn over budget and 5-7 years late, but there you go.

As such, HS2 Ltd seem to ploughing ahead with their ecocide, with South Cubbington Wood looking like it is at the top of their list, having been fenced off.

Here’s what local MP Jeremy Wright had to say at an event at the wood, with him speaking under the pear tree that was the 2015 tree of the year winner.

Many are not convinced that HS2 can be trusted, with residents planning to take more action, and naturalist Chris Packham both issuing a pre-action protocol to Government solicitors, and planning to create a forest this weekend (28th September) at Euston Station at 1pm.

email
Tags: News
News
One comment to “Ancient woodland safe from HS2 for now, except when it isn’t…..”