While Johnson has already promised a review, he has asked former HS2 Ltd chair, Doug Oakervee, to undertake it.  This is not good enough: the review needs to be impartial, and must be seen to be impartial.

We’ve attached the letter below.  But it would be great if other people could send him letters as well.

We are writing to ask that you immediately suspend all enabling works associated with HS2 until Notice to Proceed is granted, and to also set up a full, independent and impartial review of HS2.

The environmental destruction from HS2 enabling works is happening now, even though nothing can be built for HS2 until Notice to Proceed is given. Ancient woodland is being ripped up in the name of preparatory works and drinking water across the whole of London, including in your own constituency, is to be put at risk with drilling at Colne Valley, just a short distance outside it. A vast amount of the damage is irreversible.

But Notice to Proceed will not be granted for months, having been delayed several times, from November last year, until March 2019, then July and is now pencilled in for December 2019. However even that looks optimistic, requiring as it does to pass three tests: “management capability, affordability of contracts and robustness of the revised business case.”

Whilst HS2 Ltd like to claim that building HS2 has started, what they actual mean, as has been confirmed by FOIs and Parliamentary written answers, is that nothing has actually been built, just knocked down or dug up.

The problems at HS2 are obvious. Even without this weekend’s news, that HS2 Ltd had told the DfT that HS2 could be £30 billion over budget, senior HS2 staff have spent the last year pleading with suppliers to reduce costs: you yourself have spoken of a possibility that it will cost more than £100 billion.

It is expected that the Treasury’s coffers will pay for HS2, and it is even taxpayer’s money that is being used to lobby for HS2.

However there are huge gaping holes in the Phase 1 plans, with three of the four proposed stations not even on the drawing board.

In the last few weeks, HS2 Ltd have just announced that they will re-run the bidding process for the design contract of the station at Birmingham Curzon Street station, because no-one wanted to take it on for the amount HS2 was willing to pay. At Old Oak Common there is an ongoing legal challenge over the award of the contract to build the station, with an automatic suspension stopping any building work on site, for months or possibly years. At Euston, there are still concerns that there is no funding or plan to develop the existing Network Rail station to integrate with HS2. These are not long ago issues, these have all been reported on during July 2019.

Secondly, we are also asking that you set up a full, independent and impartial review of all phases of the HS2 proposal. This will have the backing from across the political spectrum. Not only did the Lords Economics Affairs Committee review of HS2 recommend a full appraisal in May, a Labour party amendment to the Phase 2a bill called for more scrutiny: an independent review could also build on the work already done by Liz Truss.

Proponents of HS2 should have nothing to fear from a proper review of HS2 – unless they think the project is built of straw and, like the Little Pigs house, will collapse with the first puff of scrutiny.

However a review of HS2 undertaken by a former Chair of HS2 Ltd can never be seen as impartial and would instead be added to the catalog of other biased reports about HS2.

These include the HS2 Plus report by David Higgins when he became Chair of HS2 Ltd, which was supposed to find ways to cut costs but instead descaled the project. Another example is the 2013 KPMG report which the Government claimed with much fanfare to show that all sorts of off route cities would benefit from HS2: what was not mentioned at the time was the numerous places from Aberdeen to Brighton and Suffolk to Swansea that would lose out from HS2 being built, nor that the methodology used was doubtful, with one economist later describing it as “essentially made up”, said Henry Overman, professor of economic geography at the LSE.

One of the few candid looks at HS2 came from sacked former HS2 Ltd chair Sir Terry Morgan who admitted that the project could not be delivered on time, on budget and to scope, saying “something’s got to give” to the Lords Economic Affairs Committee.

Meanwhile government reviews that are critical of HS2 are buried in the archives, until such time as they can be described as outdated. These include the NAO report in 2016 and the Cabinet Office review which was set up by David Cameron and buried by Theresa May.

It is reasonable that an incoming Prime Minister would weigh the needs of the nation against a policy which was exceptionally damaging to his or her own constituency. It would be perverse though to go ahead with a fundamentally bad project purely to avoid cancelling a project that damages your own constituency.

Non Disclosure Agreements are preventing many of the problems from becoming public, with even Members of Parliament saying that they are unable to find out details of how HS2 would affect their own constituencies. Concerns have been raised in Parliament, that HS2 is using NDAs to hide information: HS2 Ltd won’t even say how many NDAs have been signed.

There are many shortcomings of HS2. It does not link to HS1 – meaning that the dream of catching a train from Manchester to Paris can never be realised. It does not link to Heathrow, and the route was never designed to reduce expansion of airports: the expected modal shift is just 1% of passengers would otherwise have gone by air. HS2 Ltd themselves say that it will be causing increased carbon emissions into the 22nd century.

So, as one of your first actions, we ask that you halt enabling works on HS2 until Notice to Proceed is granted, giving time for a full, impartial, independent review of HS2. 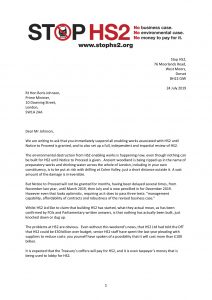 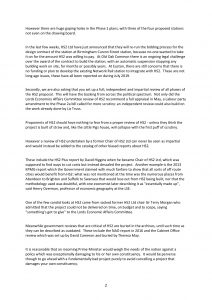 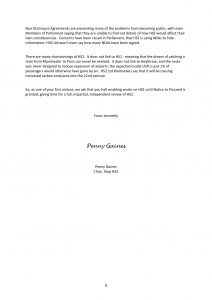