Two years ago, a request made under the Freedom of Information Act revealed that reports from the Major Projects Authority (MPA) which assess the progress of HS2 were no longer being shared with HS2 Ltd themselves. Since then there will have been around another four reports from the MPA successor organisation, the Infrastructure and Projects Authority, and another FOIA response has shown that HS2 Ltd are still not given these reports, which have rated HS2 as amber/red for five years, which means:

Some of the historic MPA/IPA ratings for DfT projects. HS2 is the only one on the whole Government book to have been amber/red for five years solid.

In response to a request for the IPA reports, HS2 Ltd state:

“HS2 Ltd does not hold a copy of any Project Assessment Reviews (PARs) conducted on HS2 by the Infrastructure and Projects Authority (IPA) since 2016 when the IPA was formed.”

But it is not just the scheduled reports from the IPA which HS2 Ltd are not getting to see, but also the special report from Sir Jeremy Heywood which looked into the possibility of cutting the cost of HS2, or at least preventing it escalating further, as well as other aspects of the project. You might think that a report which specifically looked at cutting the costs of HS2 might have been shared with HS2 Ltd, especially as it supposedly reported before the decision was made to change aspects of Phase 2b of HS2, which many saw as a cost cutting measure. In response to a request for the Heywood report, HS2 Ltd state:

“HS2 Ltd does not hold information related to this request.”

When in May 2015 it was first reported that Si Jeremy was conducting his review, the Guardian specifically stated:

A source close to HS2 said: “From what I understand, Sir Jeremy doesn’t give a stuff about the timetable, it’s about costs and what we can cut out to make it cheaper.”

A senior rail source said: “The review started about mid-March. There are things that can be cut, like engineering work north of Birmingham that becomes redundant when a link to Crewe is built in 2027. Heywood was concerned about the budget estimates and if they can cut any costs it will give them confidence of being within those estimates.” 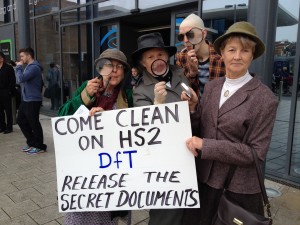 Detectives on the hunt

Then, a year later in July 2016, HS2 Ltd decide that they are changing Phase 2 and they themselves said they would save money by dropping the Sheffield station. Now we are meant to believe that this was not an option raised by Heywood, or at the very least, if it was in his report that that report was never shared with HS2 Ltd.

The same FOIA requests have been made to both the Cabinet Office and the Department for Transport, which have both asked for more time before deciding whether they will say they want to keep them secret or not, which is just part of the charade that happens every time such a request comes in, so they can stretch out the timescales as long as possible. Of course what then happens is these things finally get to go to the Information Commissioner, the ICO finds against HS2/DfT/CO but they appeal and it ends up tied up in court for years without the information ever coming out.

If you were cynical, you might think they have something to hide……

Whatsapp
Tags: News
News
One comment to “Government reports on HS2 are still too secret to let HS2 Ltd see them.”