HS2 Ltd have just appointed a new CEO. With the usual spin you come to expect from HS2 Ltd, what has been touted as “A five-month global search by HS2, which reviewed some 20 potential candidates working on projects in America, Australia and Asia as well as in the UK.”, has culminated in the appointment of someone who works with interim CEO Roy Hills at CH2M Hill, and who used to work with Chairman David Higgins on the Olympics. 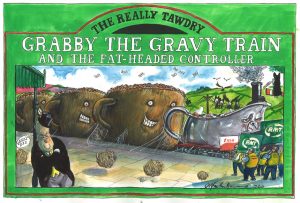 However, with Tony Douglas at the MoD the on the next nearest public salary of £500,000, the CEO of HS2 Ltd will remain the highest paid civil servant in the country, and by happy coincidence, in a couple of weeks HS2 Ltd are expected to announce a development partner for phase two of the line, with CH2M Hill shortlisted for that contract.

When Higgins was first appointed at HS2 Ltd, it was much touted that he had brought them in ‘on budget’, despite the fact the final budget was four times higher than the original forecasts. The other point of contention was that many aspects of the project, such as transport links were kept off the books and not included in the overall costs of the Olympics. Well, it’s those things, roads and bridges, that Thurston worked as delivery manager on.

“We have always said HS2 is all about jobs for the boys, and the bosses seem to be running their own gravy train, endlessly appointing their old cronies. Over half a million may be a pay cut for the post, but is still a grotesque salary, higher than anyone else in the civil service is getting and comes at a time when front line staff across the public sector are facing pay freezes and redundancy.”

“HS2 has proved from start to finish that it is a financial black hole, and those in charge of it don’t care, they just all want a slice of the action. There are an ever increasing number of snouts in an ever expanding tax-payer funded trough.”