In the last few months it has become commonplace to see HS2 Ltd belatedly starting ground surveys along the proposed line of Phase 1 of HS2. Whilst this is a clear indication that HS2 Ltd are behind on their timescales, these activities have caused a worrying amount of issues, none more so than in Fairford Leys. 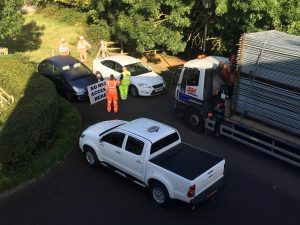 Here, residents were left incensed because vehicles used roads which were not supposed to the used for construction traffic, and a hedge that isn’t within the bill limits was removed on 4th October. The response from residents was immediate, using cars to block the newly-created access, forcing HS2 Ltd to bring in a crane to get equipment to the site.

“It appears HS2 has started already. Workmen have destroyed a hedge in Napier Road – which local residents like me voluntarily maintain, cut and care for – in order to gain access to an ancient meadow, which used to be home to the old access road to Hartwell House. Without warning HS2 workman moved onto this ancient field. There was no notice given to residents and no planning notices on display. They also brought large lorries into the field over an old bridge that was never designed for heavy vehicles. This was a very dangerous and reckless thing to do. It’s a miracle the bridge is still standing. The arrogance is unbelievable – it shouldn’t be allowed to happen.” 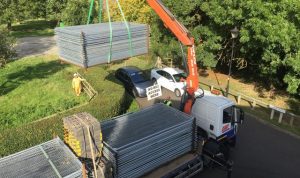 “They have already ripped up a hedge to make an access point and their intent was to drive a lorry full of equipment through the hedge and into the field. I am aware they put in a planning application along the hedgerow but we were assured they would not need to touch the hedgerow as it formed a natural barrier. We have also been told and assured that traffic would not be accessing areas of Fairford Leys as they have access from the A413. In fact, their traffic modelling was based on this fact. Yet they have ignored that from the start.”

Whilst it has turned out that removal of the hedge was agreed with the landowner, the bottom line is it was something which HS2 Ltd never previously said would be needed and never appeared in any previous plans, and they’d said they wouldn’t come this way for access. What is of more interest is the response from the community was to block access immediately.

Maybe this is an indication of things to come?