You will have seen the dreadful destruction from the recent earthquake in middle Italy. As well as the tragic impact on lives, there will be the on-going massive impacts on jobs, housing, transport, health etc. Italy has not yet managed to repair the damage from the previous earthquakes not far away so it is quite unclear how they are going to find the resources to address the new devastation.

The map shows the areas with the highest probabilities of major earth movement (dark). It is clear that dealing with earthquake damage should be a prime priority for resources. Earthquakes may be unpredictable but they are not a ‘one-off’ freak event. 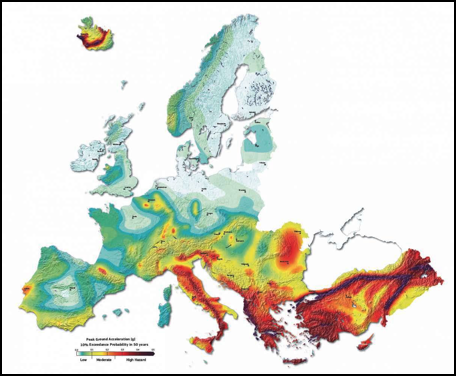 So here is one helpful suggestion from the residents of the Susa Valley. Avid and seasoned readers of this blog will remember that the Susa Valley is on the route of the Lyon to Turin HSR that is so controversial. Local communities have fought it for over 24 years and watched while the existing rail service (yes, there is an existing service!) is artfully downgraded so as to ‘justify’ the need for a new service. The suggestion is that the money and, as important, the building capacity that has been allocated to the Susa Valley HSR shenanigans, should be diverted to the desperate needs of the earthquake zone.

Usefully, the EU is currently in the first phase of a mid-term review of expenditure http://www.europarl.europa.eu/RegData/etudes/BRIE/2016/572679/IPOL_BRI(2016)572679_EN.pdf . They note (page 4) that it is probably necessary to shift cash between budget headings in order to cope with the refugee crisis, terrorist attacks and Russian ‘playfulness’. So it would be a perfect moment to say ‘hang on chaps – why not also move cash into a budget for repairing earthquake damage?’

Now this will be an interesting one to watch given our similar belief that there are far higher priorities for expenditure than HS2. Can the Italian, French and EU politicians work out the difference between the ‘need’ for a gravy train and the needs of people living in tents – without any gravy? Tricky!