Originally published on Peter Delow’s blog, HS2 and the Environment:

This is genuine ancient woodland … 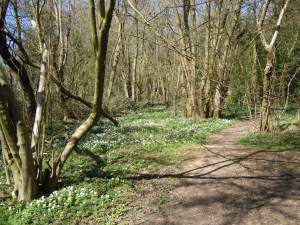 … and this, so HS2 Ltd would have us believe, is an adequate substitute. 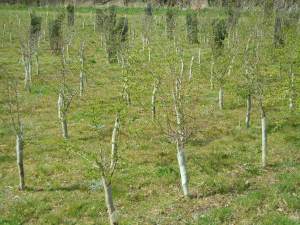 A walk amongst the trees of the former can be an uplifting and soul-restoring experience, but I doubt that a stroll through the polypropylene tree tubes of the HS2 Ltd version will be quite the same.

Now you may think that I am being a trifle unfair in presenting this stark comparison, but I do it to illustrate the point that, whilst the planting of new trees and shrubs is essential to mitigate some of the impacts that HS2 would have on our environment, it is by no means a universal panacea. However despite this doubt, I warmly welcome the report in an article on the website of the Landscape Institute that HS2 Ltd is planning “to plant more than four million trees near the line of the HS2 high-speed rail line between London and the north of England”.

Four million sounds a very impressive number, but the truth is that it is impossible for us to assess whether this is adequate, generous or insufficient. The article reports the view of Steve Rodrick, Chief Officer of the Chilterns Conservation Board, that the four million figure, “has been plucked out of thin air’. Mr Rodrick is also credited by the article with the opinion that, “no more than 10% of the seedlings planted can be expected to be thriving as trees in 50 years’ time, even assuming a good and continuing programme of maintenance”. This rate of attrition is due to plantings that fail to take, vandalism, disease, drought, browsing by animals and the need to thin out plantings to make space for the growth of the more-successful specimens.

Mr Rodrick’s reference to “a good and continuing programme of maintenance” is also very relevant to the success of any planting programme. He expresses “valid reasons for concern on this front”, citing HS1 as a precedent, where he describes the state of trees planted alongside the line as “derelict”.

However, despite these doubts new planting will have a very real part to play in the mitigation of some of the impacts of the construction and operation of HS2. The benefits that such planting may bring, if properly planned and carried out, include:

Regular readers of my blogs, for example The answer lies in the soil (posted 8 Mar 2012), will not be surprised that I have not included translocating habitats, such as ancient woodland in this list. The Landscape Institute article gives some support to my view. It reports the view of Steve Rodrick that, “There’s no way of replacing ancient woodland – simple off-setting just doesn’t work”. It also quotes Sue Holden, Chief Executive of The Woodland Trust, as saying, “… it is also essential to understand that planting trees in no way compensates for the loss of ancient woodland which, by its very nature is irreplaceable”.

“The DfT will also be looking at options for ‘fast tracking’ the planting to the beginning of the construction stage, ‘therefore maximising the landscape and wildlife benefits, as well as providing more effective screening for the line once the main engineering works have been completed’.”

Whilst it may prove possible for some planting that is away from the trackway, such as that designed to improve habitat linkage, to be done early on during construction, it is very unlikely that planting closer to the trackway will be practical at this stage, and it will certainly not be possible to plant on earthworks until after the major construction work has been completed. You may think, as I did until recently, that for faster results it would be better to plant developed trees, rather than the “whips” that you can see in the second photograph in this blog and which are familiar from motorway verge plantings. However, I learnt from a recent seminar that, although whips require more time to produce the desired results, they have a better success rate and so are to be preferred.

The Landscape Institute also talked to Conservative MP for Amersham and former Welsh Secretary Cheryl Gillan, who described the tree planting proposals as “a crude bit of public relations” and “a fairly shallow announcement”.

And I thought that I was being harsh.