The Government has explained why they have made 414 locus standi challenges against HS2 petitioners in the House of Lords, following a question by Lord Tony Berkeley. Responding to his written question, Lord Ahmad of Wimbledon said:

“The rules relating to locus standi are set out in the Lords Standing Orders for Private Business 114-118 and the basis for our decisions was included in a note that accompanied the challenge notices sent to petitioners last week. The note explained that individuals or businesses whose property or interests are directly and specially affected by the scheme have locus. Therefore, petitioners who are listed in the Book of Reference, and whose property and interests may well be affected, have not been challenged.”

So basically, HS2 Ltd have decided to reinterpret “property or interests are directly and specially affected” as “we’re taking your land”. Hence why there we are in the ridiculous situation whereby people who quite literally will have to live next to a building site, as HS2 construction goes right up to their property line, are being challenged. They also seem to be redefining “property or interests”  as just “property”. 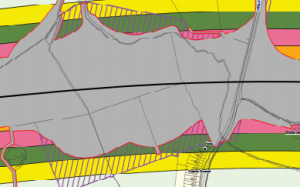 You would think someone next to the construction footprint, in the ‘green zone’ qualifying for a £15,000 homeowner payment is clearly ‘directly affected’ by HS2. Well, not according to HS2 Ltd!

It gets worse than that, because HS2 Ltd themselves have clearly admitted that people not listed in the book of reference are indeed affected by HS2, as through the Homeowner Payment Scheme, they are willing to give a compensation payment of at least £7,500 to anyone living up to 300 metres from the centre-line between the tracks, in rural areas.

The fact that HS2 Ltd are willing to make these payments automatically to anyone who applies clearly shows that they have already conceded there is a direct effect on property that they are not taking, but now seem to be ignoring this fact.

The guidance on the Homeowner Payment Scheme even says that people may be eligible if their house is outside the 300 metres but their land is within it, so to now try and deny these people the right to speak is another example of the grade one hypocrisy we have come to expect from HS2.

Maps showing the Homeowner Payment Zones can be found here.

The other thing of interest Lord Ahmad said was:

So basically that is saying that Action Groups which are fighting over specific issues in their area, are ‘outranked’ by their local council, even if the council has been ignoring the wishes of those residents. Also, it would seem that this implies that councils have “a much stronger claim to represent” the interests of people than their MPs do. Not sure that’s how it works guys……

Stop HS2 will be making the arguments above, along with a lot more when we appear on the first day of locus hearings on June 7th. But to help our case, we need your help and are asking for you to send us emails stating we represent you by the end of May. For more details, please see yesterdays article.