Speech by Lord Rowe-Beddoe in the House of Lords Second Reading Debate, 14th April 2016. From Hansard 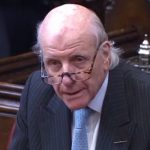 My Lords, I rise to express my concern and great disappointment that the unanimous conclusions of the Economic Affairs Committee of this House, published just over a year ago, largely remain ignored by this Bill. Some of your Lordships may recall that we entitled the media release:

“The Government has yet to make a convincing case for a £50 billion investment”.

We were not satisfied, as the detail of our report illustrates. I regret that I am the only member of that committee here today, but I remain dissatisfied, not with the objectives of the Bill, which I strongly support, but with the amount of money being spent. It has not been proven to my satisfaction that a case has been made.

I endorse some of what the noble Lord, Lord Prescott, said about the planned sequence, for example, of the construction of HS2 and HS3, which the committee also made reference to. Further, I agree with my noble friend Lord Birt that Liverpool must be included, and a very strong representation was made by the elected mayor of that city to such effect to the committee.

We really must be satisfied that such a capital sum of proposed investment is appropriate and is better value than any modification or alternatives to the route proposed. Your Lordships’ committee commenced deliberations in October 2015—I point this out just so the House knows that time has been spent on this; I know the noble Lord, Lord Berkeley, had great experience of this with committees in the other place—and spent some six months in the close examination and questioning of both written and oral evidence. We received the Government’s response in July—I assume that the general election intervened—and the report itself was not debated until September, some nine months after we started to take evidence.

In my opinion, nothing in this Bill takes on board or responds to the concerns we raised at that time—or indeed in the subsequent letter from our chairman, the noble Lord, Lord Hollick—with the Government following their response. The noble Lord raised 10 issues, which received no response at all. This suggests to me that, on HS2, the minds of officials and government Ministers have been firmly made up for some time and that they are determined to proceed with this enormous investment in the form this Bill proposes. Sadly, I must repeat what I said in last September’s debate. The attitude is:“Here is your answer; what is your question?”.—[Official Report, 16/9/15; col. 1876.]

I know from some of the remarks made by the noble Lord, Lord Berkeley, that he has experience of such obfuscation.

Let me be clear: I am greatly in favour and supportive of much-needed infrastructure projects and, indeed, the objectives behind this specific project. However, I am not satisfied that a less expensive alternative has been fully examined and quantified.

Interruption from Lord Lea of Crondall: I am most grateful to the noble Lord for giving way. I have in my hand a copy of the Government’s response to the House of Lords Economic Affairs Committee on the economics of HS2, which I thought was very well analysed indeed. Has the noble Lord in turn studied that response? Can he give chapter and verse as to where he disagrees with or faults the analysis? I have no axe to grind with the Economic Affairs Committee, but it seems to me that the noble Lord ought to acknowledge that it received a very full reply.

Lord Rowe-Beddoe I have the report in my hand and, obviously, I have studied it. I repeat my words: it did not address the recommendations that our committee made.

I was asking whether the alternatives had been fully examined and quantified. I refer to the work, for example, of the organisation High Speed UK. This company believes that it has a credible proposal to achieve connectivity and provide the higher capacity, on a like-for-like basis, at a lower cost of some £20 billion. If that is make-believe, somebody say so; if it is not, should it be looked at? Environmentally, this proposed route entirely avoids the Chilterns—that is quite interesting, and certain Members of your Lordships’ House have talked about that today—and would reach Birmingham by building a 12-kilometre tunnel. Further, it is believed that through comprehensive intercity connectivity and increased capacity, there would be a major change in the road-rail relationship, which could significantly reduce transport CO2 emissions.

Finally, let me turn to the Euston station rebuild. I acknowledge the remarks made by the noble Lord, Lord Bradshaw, and his expertise in this area. There appears to be no strategy to divert commuter flows away from Euston. This central part of London will be greatly affected by the current plans, which will have an enormously adverse impact on the travelling public and the community during a lengthy period of construction—the demolition of some hundreds of homes; the relocation of thousands of graves, as alluded to by the right reverend Prelate; and the closure and complete disappearance of a street. However, there is no apparent plan to divert commuter flows. Your Lordships’ committee was interested in the Old Oak Common solution, which was referred to again by the noble Lord, Lord Bradshaw. It would connect Crossrail to the west coast main line, thus enabling more commuter services to be moved from Euston, which could enable the current footprint of the station to be maintained while all the work is going on, without the necessity to expand into Camden.

I realise that this Bill was passed without amendment last month in the Public Bill Committee of the other place, and subsequently on the Floor of the House without Division. Nevertheless, I firmly believe that if a cost differential of some £20 billion—remember, these are 2011 prices—can be tested rigorously and verified independently, we should pause for a moment and request the Treasury to so do.

email
Tags: News
News
One comment to ““Nothing in this Bill… responds to the concerns we raised””