Speech by the Bishop of Coventry in the House of Lords Second Reading Debate, 14th April 2016.  From Hansard. 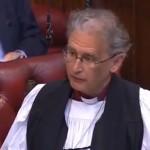 My Lords, it is not easy for a jobbing bishop to follow the noble Lord, Lord Adonis, but I am glad at least that my purpose in these few words is not to assess the wide-ranging economic and environmental arguments that have been set out on this project, either for or against. Clearly, there are others much better qualified to do so than me, and many are speaking in this debate—I particularly look forward to the maiden speech of the noble Lord, Lord Mair, which I know will be the sort of contribution to your Lordships’ House that we would expect from such an eminent mind and the sort we will hear more of on other occasions. However, as someone who tries to keep close to my local ground, I can focus on the people who live on or near the proposed line and on the great importance—indeed the moral imperative, as we have already heard—of continuing to engage with them as the project is implemented.

A good number of those people affected by the line live in my diocese, which extends over most of Warwickshire. Already, before the big money is spent, another serious, human cost is being paid in the villages, farms and homes of the people I meet. Many of the arguments surrounding this massive project have to do, quite rightly, with the legacy we leave to future generations. Alongside a strong and sustainable economy, a vital part of that legacy must be lasting relationships of good will and trust between those responsible for such a project—or those benefiting from it—and those whose lives are made more difficult by it.​

There is an especially sensitive matter on which the legacy of trust for the future depends, and that is the burial grounds of those who lived in the past. I am very grateful that the Bill includes careful provision for situations in which the exhumation and reburial of the dead must take place, but I would value the Minister’s assurance that those involved with this project will work closely with churches and others, including the Church of England, to ensure that the issue of exhumation and reburial is dealt with sensitively when it occurs.

Moving from the dead to the living, but also to other forms of grief, there is a sense of trauma among the farmers of Warwickshire I have spoken to— understandably when one of those farmers stands to lose 125 of his 800 acres from a farm that has been held in the family since 1842. There are high levels of anxiety among the farming community, much of it fuelled by the continuing uncertainty over the details, such as the specific design and timings of construction works on their land. This uncertainty is a blight upon the careful planning that farmers must do well in advance about the use of their holdings.

For some projects, such as that at Stoneleigh Park—formerly the National Agricultural Centre—which I visited recently, this uncertainty is causing serious delays in inward investment. I would be happy to provide details of specific cases to the Minister in writing. I appreciate the painstaking work of the committee to which the Minister referred and the response to the specific cases that have been made and welcome the Minister’s words about the role of the Select Committee, but I agree with the noble Lord, Lord Rosser, on the need for more clarification. That would be helpful. In addition to those processes, what plans do the Government have to keep in contact with local communities and businesses as the project is implemented to alleviate their anxiety, decide on solutions and enable better planning for the difficult years ahead in very practical ways?

A recurring concern among those I have met is that they are finding it difficult to resolve concerns with representatives of HS2, especially when complicated by the necessary involvement of other bodies, such as the Highways Agency over the massive traffic of heavy vehicles through the area during construction, very often through small country lanes. I doubt whether the suggestions from the noble Lord, Lord Bradshaw, for the removal of spoil in London will work in Warwickshire. Even when a good relationship exists, progress in such discussions seems slow and often financially costly. For some, trust that their concerns will be heard is, I fear, being taken over by scepticism and frustration—a reality already referred to by the noble Lord, Lord Rosser.

I cannot help but feel some real unease at this. The level of good will and trust of these communities along the line is a major part of the legacy which this project will leave. For this to be maintained throughout this project’s long construction phase, it is important that the Government take steps to ensure that HS2 is not only accountable but clearly seen to be so. The Government have made it clear that they believe that the appropriate accountability structures are present. However, in the debate in the other place, an amendment ​was put forward that went a step further and created the office of independent adjudicator, a body of independent experts in a variety of relevant fields with power to hold the project to account and so bring reassurance to those communities that feel they are being unfairly treated. As we know, the amendment was defeated but, in the light of the concerns still being raised by local communities and businesses about how HS2 is implemented, can the Minister set out why such an independent adjudicator would not be a helpful solution? Could this proposal not be revisited to answer the real concerns of local communities and ensure justice is seen to be done?

I draw to a close by moving from rural areas in the path of HS2 to cities that are bypassed by the line, Coventry being one of them. Coventry is more fortunate than many cities further from the HS2 route; we are accessible from Birmingham International, and could benefit from the greater connectivity of HS2, even though we do not directly sit on its line—as long, of course, as direct connections between London and Coventry are not reduced. But even for Coventry, and certainly for many other cities and towns, the massive investment in HS2 must surely go hand in hand with a focused strategy to integrate it with our country’s existing transport network. When France invested in high-speed rail, that integration proved vital to the economic benefits of the project. What steps are the Government taking to connect HS2 with existing road, rail and other transport links, to ensure that its benefits are experienced as widely as possible?

It cannot be doubted that those living on or near the line face hard and testing years ahead. The Government have an important responsibility—and this is my main point—to continue to listen to their concerns, seek to work with them, and prove worthy of their trust. I said earlier that that is a moral imperative. They also have a great responsibility to see the benefits of this project extend as widely as possible. Alleviating the pain compassionately and fairly, and sharing the gain imaginatively should drive government policy and the final shape of this Bill.