Last week in was reported in The Independent that transparency data published by the Government shows that 35 staff at HS2 Ltd earn more than the Prime Minister. That is a lot, but hang on, isn’t that less than the 46 the Financial Times reported on a couple of weeks ago?

Well yes it is! So how has this happened? Well, maybe the most important thing to remember here is when and why these data sets were collated. The one that was published last week was collated by the Cabinet Office as part of the Governments’17th December ‘Transparency Day’ and looked at civil service salaries as of September 30th 2015. The one reported in November was as a result of a Parliamentary written question from Cheryl Gillan MP and the data set was compiled in October.

There is of course one caveat, the ‘transparency’ set shows the upper and lower limit of wages for specific individuals, whilst the written question set shows averages across bands. When, on November 24th, Stop HS2 supplied the information to the Financial Times, they quite rightly queried the number of 46 staff earning than the PM. We told them we couldn’t be 100% sure as some of the 20 staff getting average wages of £162,835.60 might be getting an absolute wage below the £150k Mr Cameron is on. Whilst this could bring the estimated total of 46 down, it couldn’t bring it down too much as the pay bands are too narrow, and looking again at the figures now it couldn’t possibly bring it down as low as 35. 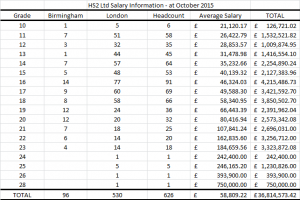 So the answer at the time was simple, there was only one way to get a definite answer, and that was for the FT to put the number of 46 to HS2 Ltd, and when they did media spokesman Ben Ruse didn’t dispute the figure, he justified it. Given that HS2 Ltd are on a recruitment drive it could well be that by November 24th, the figure was actually higher. The public bodies dataset (Sept 30th) lists HS2 Ltd as having 605 employees, whilst by ‘October 2015’ there were 626. It’s likely that by November 24th there had been a similar increase in numbers.

The bottom line is that the two sets of figures cannot be reconciled, partly because they have been presented in different ways.

One thing that does stand out from the ‘new’ (older) data is that it records the change in salary since 2014. In that table 33 out of the 35 staff are down as ‘no change’ as they are new staff or old staff in new posts, which demonstrates perfectly the recruitment drive for high-paid executives. The only two members of staff paid over £150k still in the job they were over a year ago are recorded as Andrew McNaughton and Beth West. The Naughty Professor must feel hard done by as he ‘only’ got a 9% pay rise in January, whilst Miss West raked in an extra 27%.

Again, HS2 Ltd must not have got the memo about the pay freeze, which supposedly was meant to limit pay rises in the public sector to 1% for four years, at best.

Whatsapp
Tags: News
News
2 comments to “So, how many overly high-paid staff does HS2 Ltd actually have?”