As expected the Queen’s speech today confirmed that legislation for HS2 will continue with the statement “My government will continue to legislate for high-speed rail links between the different parts of the country.”

This is a lot less grand and important than it sounds.

Firstly, if you look at the Government’s briefing notes, they say it only refers to Phase 1:

“Provide the Government with the legal powers to construct and operate phase 1 of the High Speed 2 (HS2) railway. On becoming an Act, it would give the Government deemed planning permission for the railway between London and the West Midlands.” 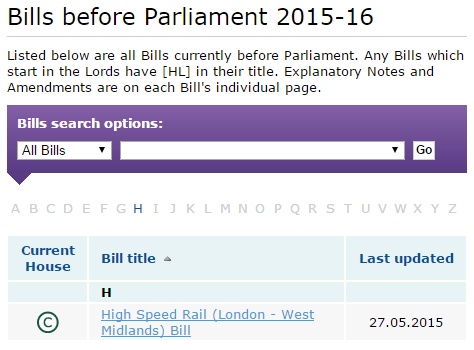 As things stand after the Queens Speech, there is only one Bill before Parliament.

So while the Queen spoke of different parts of the country, the government did not mean Scotland, or even any of the northern cities in England: its just high speed rail between London and Birmingham.

HS2 Ltd are having significant problems designing the route north of Birmingham to Manchester and from Birmingham to Leeds.   Meanwhile, at the London end, there continue to be huge problems over Euston (HS2 Ltd recently told Camden residents that works would continue at Euston until 2033).

Secondly, the statement was a constitutional necessity to allow the current HS2 Phase 1 Hybrid Bill to continue the work of listening to petitions.  Most Parliamentary bills are effectively scrapped at the general election, needing to start the process again.  Hybrid Bills are the exception to this.

The reality behind the Queen’s statement is that on the high speed rail front there is nothing new.