On 19th January the HS2 Hybrid Bill Committee said they wanted clarification on the policy of HS2 Ltd regarding responding to Freedom of Information requests. On 9th February, they found out that HS2 Ltd have been consistently breaking the law, withholding information which they have no right not to release.

“On Freedom of Information, on FOI, we would like HS2 to give us a paper with their position on disclosures of costings; when they will, when they won’t, and the reasons. We would also be interested in what level of breakdown would mask commercial sensitive – commercially sensitive figures. Further, we would like to their position on what is only disclosed after an FOI request, and why, with particular reference to situations such as that mentioned on noise barriers on Berkswell and the cost of alternative options at Water Orton. We would like to know whether there are cases where information could and should be given without need for an FOI request.”

The reason the committee issued this statement is because many petitioners before then and since had complained that they had been hamstrung in their efforts to propose mitigation proposals, because whilst HS2 Ltd might provide a costing on what a community had proposed, which seems to make all mitigation proposals seem unaffordable, they seemed less interested in providing the equivalent cost of what they themselves are proposing. The problem with this is that they have consistently ignored the provisions of the Environmental Information Regulations, which trump FOI legislation.

So it is heartening in the session on the 9th that not only did the committee take in what the EIRs entail, but also HS2 Ltd QC Tim Mould did not dispute any of the facts presented, admitting in the corridor following the session that he had not done so, because everything that had been said was absolutely correct.

You would wonder how on earth the cost of a bridge, a cutting or anything like that could possibly be ‘commercially confidential’, but that is what HS2 Ltd have been using as an excuse for non-disclosure of such costings. The rub is, this is completely illegal. 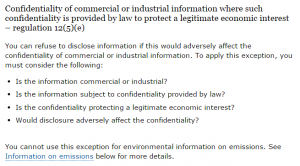 This bit of legislation seems to have slipped past HS2 Ltd

No matter how a request for information is put, a public body like HS2 Ltd have to treat it under the terms of both the FOI and EIR Acts. However, whilst the FOI Act allows requests to be turned down on grounds of commercial confidentiality, under the EIR Act they cannot be, where emissions are concerned. Now ‘emissions’ under the act could be noise, or dust, or even water. There is no question that every aspect of HS2, both during construction and operation will create emissions, so there is no defence for withholding information. 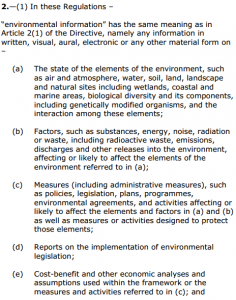 Not only that, but the act is also specific in terms of the sort of information that should be released, and that includes the cost-benefit and other economic analyses. This raises an interesting question, which wasn’t brought up at committee, in is only since then that the light-bulb has appeared. As part of the Environmental Impact Assessment, made this statement (point 3.3) regarding the Human Rights Act:

“The Bill does not engage rights to a fair trial under Article 6 of the Convention, as the Bill process concerns the passage of legislation and not the determination of civil rights. In any event the petitioning process and hearings before the Select Committee will ensure that those direct and specially affected will have a proper and fair opportunity to present their concerns to Parliament.”

This begs a rather significant question, if HS2 Ltd have illegally withheld information which would have allowed petitioners to present their case for mitigation with more authority to a Quasi-Judicial Parliamentary Committee, is that ‘fair’? If not, then have petitioners in effect been denied a ‘fair trial’ in breach of their Article 6 rights? If anyone would like to hazard an answer on that one, we’d very much like to know.

There was another issue brought up at committee regarding FOI legislation, the ongoing saga of the Major Projects Authority, but that’s another story.

Whatsapp
Tags: News
News
2 comments to “HS2 and the illegal withholding of information.”