Cubbington Against HS2 sent out their reaction to John Hayes saying there will be a review of the 250 pear tree:

During a debate in the House of Commons on Friday 25th January 2015, Minister of State at the Department for Transport, John Hayes MP, announced that he had “asked for a new arboreal study to see whether the Cubbington pear tree can be moved”, rather than be felled, as the current plans for the High Speed Two (HS2) project require. 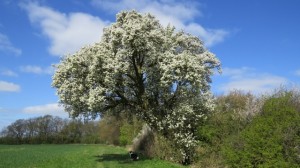 The Minister conceded that the Cubbington pear tree, which he identified as “the second oldest in Britain”, has been “the subject of a considerable campaign” to save it.

This statement comes in the week that two members of the Cubbington Action Group against HS2, Rosemary Guiot and Peter Delow, had appeared before the House of Commons HS2 Select Committee to appeal for the HS2 design to be changed to incorporate a bored tunnel under South Cubbington Wood; this tunnel would allow the tree to remain in its current location, unmolested, and would alsoavoid the extensive damage to the wood itself that the current plans entail.

The Minister’s announcement was made despite an environmental impact assessment by HS2 Ltd, the Government-owned company that is charged with designing HS2, finding that the translocation of the tree “is extremely unlikely to be successful and is not proposed”.

In his speech, the Minister commented that “ancient woodlands are an important part of our natural heritage so they need to be protected wherever possible” and ventured that “the best way of doing that is to avoid them in the first place”.

“This announcement came as a complete surprise. Whilst I welcome the Minister’s concern for the fate of Cubbington’s veteran tree, the findings of the environmental impact assessment, if they are to be believed, do not augur well for the outcome of the new assessment.

“I heartily concur with the Minister’s view that ancient woodlands need to be protected, and his assessment that avoidance of damage is the best way of achieving this. If he is serious about this, then I ask him to look at our proposals for a tunnel that will do just that for both the wood and the tree.”