This is a guest article by Lottie Jones, from Ruislip Against HS2

Ruislip Against HS2 are disappointed to be losing Sir John Randall as MP, given his support and help with our campaign so far. 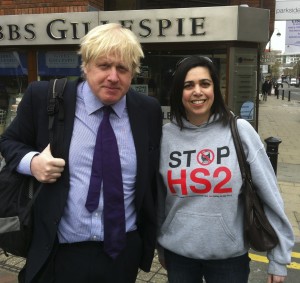 The Uxbridge/ South Ruislip seat has been safe under Randall but Johnson will have some serious work to do if he’s going to win round potential constituents, he’ll have to be prepared to really step up on HS2.

As Mayor of London he has been vocal when calling for better planning and mitigation of HS2 across London, including his support for the” Heathrow Spur” to be dropped.However he has also made seriously disparaging remark about campaigners against HS2, which many will find very difficult to forgive.

He has been reluctant in the past to be drawn on his overall position on HS2 but if he wants to be MP here he’ll have to make up his mind just where he stands – and soon. If he thinks he can use this move to become MP as a stepping stone without taking local issues seriously then he can think again.

RAHS2 have met with Boris several times over the last few years and we’ve made him aware of the HS2 issues here but he’s going to have to quickly learn in more detail just how badly Ruislip is affected by the plans and just how strong the local feeling against HS2 is.We will of course be offering him an insight into the local knowledge that he’ll be needing…

Boris Johnson may have picked Uxbridge and South Ruislip to stand as MP – but we haven’t picked him yet.

email
Tags: News
News
10 comments to “To Boris, from Ruislip”