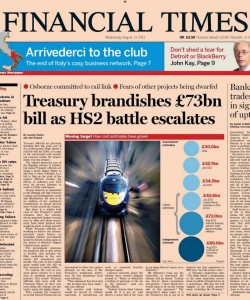 Treasury officials have told the Financial Times that the cost of building HS2, currently officially at £42.6bn, would be closer to £73bn in cash terms. The official construction costs are already two years out of date as they are set on 2011 prices, and do not include VAT which the National Audit Office believes would be unrecoverable.

While George Osborne, dubbed by Stop HS2 campaigners as the “Six Hundred Million Dog-Leg Man”, after a handbrake turn costing £600m was incorporated into the route avoiding the more affluent areas of his Tatton constituency is said to be all for HS2, but the FT says the Treasury’s senior echelons think HS2 will drain investment from other projects which would do more to boost growth, stating:

“Senior Treasury officials who have told the Financial Times of their concern about a scheme that will dwarf other public infrastructure projects over two decades, have privately started using the higher figure.”

Both the £42.6bn and £73bn figures do not include the cost of trains, which are currently set at £7.5bn in 2011 prices, despite the fact it would be around a decade before any trains are needed. This revelation comes hot on the heels of a report from the Institute of Economic Affairs who said that HS2 would cost around £80bn. The IEA arrived at this figure by adding the cost of trains and estimating costs for further mitigation, additional connections to the rail network to ‘plumb in’ HS2 and regeneration funds, not inflation and VAT as the Treasury have done. The Stop HS2 campaign maintains there will be additional costs to HS2 which are not yet factored in, such as the true cost of compensation and other factors as yet omitted from published designs, such as farm and foot bridges.

“After the IEA reported at the weekend that the HS2 cost could rise to £80bn and only those with vested interest were lobbying for it, exactly those vested interest groups have spent all their time saying their costs were just plucked out of the air. Now the Treasury has come up with a similar figure just for the construction of HS2 simply by adding inflation and VAT, not even the cost of the trains, one wonders what they will say.”

“We have said consistently that the costs of HS2 will keep going up, and now we’ve had two different sources showing how costs will escalate in different ways. How long will it be before the cost over £100bn? Putting together the different things the Treasury and IEA have said, you could say it’s already there. As the Public Accounts Committee said last month, all that has happened with HS2 is that the projected costs have gone up and the projected benefits have gone down. No matter how hard HS2 Ltd and the DfT try and fiddle their updated business case later this year, it will be a transparent attempt to put a ball gown on a white elephant.”

“The IEA and Treasury have said what we have said all along, that there are better infrastructure projects on the table which will be better for the economy, and will deliver more lasting benefits to more people more quickly and create more jobs for less money. It seems insane that the Government remain wedded to HS2, knowing that all the evidence shows that at best it won’t do what is being claimed, and at worst – with the idea of rebalancing the economy and boosting the North and Midlands – it will do exactly the opposite.”

“There is a very simple reason as to why every new revelation about HS2 is bad: because it’s a bad idea, poorly thought out, with no justification that stands up to any scrutiny and it’s being implemented by buffoons. This Whitehall Elephant has to be stopped before it tramples everything in its path.”