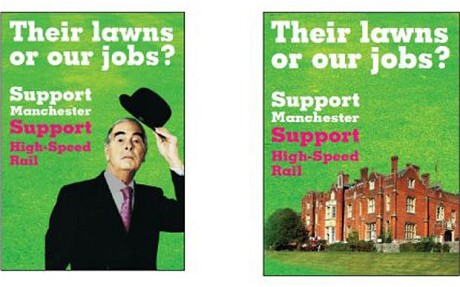 A report from Spinwatch has revealed how lobbyists set out to intimidate local opposition HS2. Their report, ‘Scaring the living daylights out of people: the local lobby and the failure of democracy’ includes information about how lobbyists working for the Campaign for High Speed Rail set out to intimidate local opposition aiming “to shit them up”. The Campaign for High Speed Rail is also cited as an example of ‘astroturfing’, claiming to be a grass roots campaign, when in reality it is run by lobbying firm, Westbourne Communications.

According to Spinwatch, their report;

“Documents the abuses which characterise the operation of local democracy in many parts of the UK with intimidation, bullying or conflicts of interest common practice among lobbying companies, developers and local authorities promoting contentious development.”

 The lobbying company campaigning for high speed rail that sets out to intimidate local opposition, aiming to “shit them up”.

 The HS2 campaign is an example of ‘astroturfing’, a campaign which is set up to give the impression that it is a grassroots campaign, although it is in fact run by lobbyists.

 The lobbying company boasts of its military tactics and how it tackles local opposition by creating a ‘mini army’ to ‘fight them on every street corner.’

The strategies of the Campaign of HSR have long been criticised, especially their main strategy of characterising opposition as “posh people standing in the way of working class people getting jobs”, which was the brainchild of Lord James Bethell, a former Conservative parliamentary candidate. The campaign “Their lawns or our jobs”, attracted widespread criticism, including from the Transport Select Committee.

“Speaking at a conference of distinguished guests in 2012 the lobbyist went on to explain other lobbying strategies for winning the case for HS2: how they create compelling stories designed to change the parameters of the debate. They didn’t want the HS2 ‘narrative’ to be about shaving minutes off journey times to Birmingham and in the process cutting through swathes of countryside. The debate they sought to create was about pitting wealthy people in the Chilterns worried about their hunting rights, against working class people in the north. The strategy was ‘posh people standing in the way of working class people getting jobs’ the lobbyist said. The lobbyist went on to explain how they enlisted support for HS2 with a bus tour of the big northern cities, working with celebrities, local radio and high status politicians with the aim of enthusing local people to tell 1,000 stories about just how good high speed rail would be.”

“In the audience was an academic who was shocked by the ‘cold, militaristic approach’ outlined and the use of intimidation and threats promoted by the lobbyist. ‘This is a debate which is tricky and nuanced. But this wasn’t open at all, it was very coldly targeted and very strategic in the way that images were put forward. That’s the way PR works but it was so calculating. I came away thinking this has implications for the way democratic debate develops in this country, particularly the element about the scaring the living daylights out of people,’ the academic said.”

Recently, the Department for Transport admitted to paying Westbourne Communications £61,000 for support during Januarys announcement of Stage 2, whilst previously former Secretary of State for Transport Phillip Hammond MP attended the campaigns launch event in April 2011, when rail companies were asked to pay £10,000 each to the fighting fund. At dinner organised by Westbourne in November 2012, Simon Burns MP said the campaign’s efforts were “highly regarded and greatly appreciated”. Westbourne Communications also provides the secretariat and press office for the All Party Group for High Speed Rail, which is paid for by; TSSA, Bruntwood, South West Trains, Abellio, Eurotunnel and The Core Cities Group.

“We have long been used to the fact those supporting HS2 decide to play the man, not the ball. With the arguments against HS2 being so strong and so well supported, the only option for the vested interest lobbyists has been to demonise the opposition to the project. They try and claim this is all about ‘nimbies versus the national interests’, but we are not nimbies because we’re not saying put this somewhere else, we are saying don’t do it, because HS2 is not in the national interests.”

“It is a sad indictment of the way politics operates that such tactics are supported by Government and taxpayers money is not spent on trying to do the right thing, but just trying to dismiss anyone who dares to speak out for what is right as being motivated by self interest, when the truth is that the people lobbying for this insane waste of money are just in it to line their pockets.”