This article was first published in the Huffington Post.

Last week, when a group of Conservative backbenchers took a shopping list for their manifesto to the Number 10 policy unit, they were surprised to be told that changing the position on HS2 was already under consideration.

It had previously been reported that Theresa May wanted to cancel HS2 when she became PM, but was told it was ‘too late’. £2bn may have been blown on HS2, but there is no excuse in throwing good money after bad. Forget the Garden Bridge, remember the cancelled NHS computer system burning £9.8bn, or the £740m of projects Theresa May dumped on arrival at the Home Office?

With the secret Heywood Report into the true state of affairs at HS2 Ltd, there is no doubt good reason for not wanting to be tied to Camerons’ HS2, but at the weekend May seemingly caved in to pressure from HS2 cheerleaders, telling the Yorkshire Post “We remain absolutely committed to HS2″.

This week-long wobble was reminiscent of the one Labour had in 2013 when Ed Balls had the sense to ask; “Is this the best way to spend £50 billion?”. Balls, like May it seems, was firmly instructed by those from the cities HS2 is due to ‘benefit’ that this was a non-starter, which given that HS2 Ltd have employed 17 PR firms so that Government can lobby itself, is sadly no shock.

Jeremy Corbyn, who previously voted against HS2, is similarly hamstrung. His Momentum group is heavily dependent on rail unions ASLEF & TSSA, whose mentality is no more complex than ‘more trains good’, despite HS2 being clearly an all-or-nothing affair. With inevitable budget over-runs, HS2 would suck up the entire DfT capital budget and more, squeezing out more beneficial rail infrastructure projects for decades to come.

First adopted without any assessment of whether it is needed, HS2 is now exactly where the 2006 DfT transport study by Sir Rod Eddington warned it would be:

“The challenge to be tackled has not been fully understood before a solution has been generated……. Such projects – ‘grands projets’ – develop real momentum, driven by strong lobbying. The momentum can make such projects difficult – and unpopular – to stop.”

Arguments used to support HS2 are superficial superlatives without substance: “Essential, compelling and transformational”, and that it will “Deliver connectivity, productivity and growth”. The reality would be exactly the opposite. Whilst HS2 is pushed as a magic wand to cure the North-South divide, every single piece of international evidence shows it would reinforce the dominance of London. 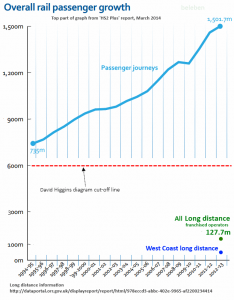 HS2 Ltd frequently use the top half of this graph to demonstrate the ‘need’ for HS2 (via beleben).

As everyone accepts railways need more capacity, that is now what HS2 is supposedly for. But HS2 delivers capacity where it is needed the least, decades away, and at the highest possible cost. The vast majority of rail passengers are not the inter-city business elite HS2 would serve, but short distance commuters. Whilst ‘freeing up capacity’ sounds like a laudable aim, the HS2 business case states this would be achieved via £11.2bn worth of unspecified cuts to existing rail services.

Across the world, high speed rail lines require massive subsidies having failed to achieve the grossly inflated passenger forecasts used to justify their construction. The National Audit Office say HS1 in Kent will cost an extra £10bn for just this reason.

The deception surrounding HS2 has long been endemic, with Chris Grayling sticking to the oft-repeated line that for every pound spent on HS2, we will get back £2.50 in benefits back. This hasn’t been the case since the benefit cost ratio was downgraded in 2013, and since then the proposed links to the Channel Tunnel & Heathrow have been cut, without the BCR being updated. These supposed benefits rely on the absolute ‘fact’ that no-one ever works on trains, and also assumed are further unbudgeted, unspecified, off the books investments needed to plumb HS2 in the existing transport system.

For seven years, HS2 has suffered from the worst possible thing you can have in UK politics; dogmatic and unwavering cross-party support. When scrutiny of HS2 has come from the likes of the NAO, Public Accounts Committee, Economic Affairs Committee and others including a host of transport, environmental and economics experts, it has been dismissed and ignored using standard soundbites. This culture has meant despite HS2 being consistently rated as in danger of failing by the Cabinet Office, HS2 Ltd repetitively claim they’ve fixed all the problems, and six months later the cycle repeats.

Legislation for Phase 1 may have passed two years late, but according to HS2 Ltd it is still “On time and on budget”. That overall budget now stands at £55.7bn, a figure which looks exceptionally similar to the suggested Brexit divorce cost, significantly up from £32.7bn in 2010, and a long cry from the £15.7bn of public funds Theresa Villiers suggested high speed rail would cost in 2008.

When the price tag rose to £55.7bn, Parliament was assured this was purely to take account for inflation. Typical of the obsessive and incomprehensible determination to proceed HS2, this was another lie, as an FOI showed the cost of Phase 2 had spiralled by 39.2%, with the overall cost of HS2 massaged down by inexplicably deciding the trains would now cost less.

There are very few who believe £55.7bn is all HS2 would cost. In 2013 the Treasury came up with £73bn, Michael Byng who wrote the book for Network Rail on cost estimates says Phase 1 would take the entire budget, the NAO recently found a £9bn over-run, and Kelvin Hopkins MP has gone on record saying:

“Leaks from inside the HS2 bureaucracy suggests the total cost of HS2 will be over £200 billion.”

Alarm bells should be ringing loud and clear, but none of this matters in the face of lobbying from the firms that want to build HS2. By walking away from one contract due to a conflict of interest scandal last month, US-based CH2M maybe hoped to deflect attention from another contract, which gives them a say in who gets £8.6bn worth of construction contracts. For an idea of how those might turn out, the first HS2 contract gave CH2M was for £70m, but it came in 49% over budget at £104m.

No-one expects that the next Government will have an easy time. But remarkably, despite an almost inevitable backdrop of more cuts in public services, politicians are queuing up to embrace the ongoing festering sore of more delays and more billions on a project, only wanted by those planning to rake in those billions.

All the evidence shows HS2 will be a disaster, but what do politicians care about evidence?