Without doubt, for anyone at Labour Party Conference in Manchester who actually has a question about HS2 and actually wants an answer, the place to come has been the Stop HS2 stand, as asking questions at any of the fringe meetings seems to have been totally pointless, as they have simply been home to a cycle of tired and repetitive rhetoric. About the only thing which seems to have come out of the four fringes is that it has been confirmed that not just within Labour, but seemingly for the whole project, Manchester City Council are calling the shots and holding the country to ransom. 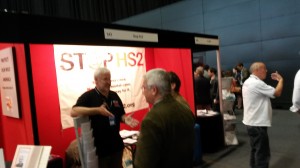 The first fringe was called “Beyond HS2, what next for rail?”, which started off with the chair, David ‘Edinburgh Tram Disaster’ Begg saying that the debate about HS2 was all over and we should now move on.  However this view was immediately disputed by Shadow Transport Secretary Mary Creagh who said that not only was there still ongoing due process, but there was a still debate going on. Her view on this issue may well have been tempered by the fact that at a recent vote of the Wakefield Labour Executive Committee, she was the only member to vote in support of HS2. [Creagh later denied this – see HS2 – The Final Fringe.]

After the speeches, the questions came. The Stop HS2 question was “When David Higgins announced HS2 plus and effectively asked for the ‘One North’ and ‘HS3’ proposals because there is other stuff needed to make HS2 actually work, was that not an admission that HS2 will not be this magic wand to heal the North-South divide? And if Network Rail are saying that they can’t guarantee the current Trans-Pennine electrification project because they have run out of money, where is the money for HS3 and even HS2 to come from?”

Sir Howard Bernstein, the CEO of Manchester City Council basically responded by saying that he wanted the earth and the moon and all the stars in the sky too; that wasn’t an either or and they wanted everything on offer and anything else they could get their hands on too. The cost to him seemed to be somebody elses problem. Creagh on the other hand, got completely the wrong end of the stick, admitting that Trans-Pennine and Great Western electrification has gone over budget, but that the problem which has caused these cost increases is the delays. That sort of missed the point completely, that the cost increases have come about because things were rushed at the start, because of the political need to make a vote-wining policy, and like HS2 they weren’t costed properly in the first place, meaning not only the have costs gone up, but delays have happened because the plans weren’t solid from the start.

Chris from Birmingham Friends of the Earth asked where the electricity for HS2 is going to come from, and with the attitude that the HS2 passenger forecasts seem to have been based on, David Begg was of the opinion that if HS2 is built, the electricity will somehow magically appear from a wire leading to somewhere else, just like it always does.

The main thing to come out of the ‘HS2 Midlands Connect’ fringe was an answer to a delegate from Stoke on Trent, who asked about the possibilities of Stoke getting a station instead of Crewe, to which Sir Albert Bore, the leader of Birmingham City Council advised the stunned questioner that she should ask the Manchester City Council Leader Richard Leese, as it was up to him.

The word floating round conference is that the decision has already been made, and the station will go to Crewe, which given that Sir David Higgins said this when pre-empting the Phase 2 consultation at an event in Manchester earlier in the year should be of no great surprise. The other titbit coming out of rail experts attending conference is that Network Rail and HS2 Ltd are currently prioritising how they would connect Crossrail to the West Coast Mainline as the expectation is that HS2 construction would not cause the current official estimate of 10 years worth of closures at Euston, but 15 years.

With the sort of attention to detail that you might expect where HS2 is concerned, the Midlands Connect fringe clashed with ‘From HS2 to HS3: A high speed route to rebalance Britain?’, where Lord Adonis, the man whose daft idea this was in the first place, spent all the time after giving his speech glaring at the people in the room who had identified themselves as against HS2, maybe hoping that if he concentrated hard enough, he might develop laser vision and vaporise them.

Despite the fact that the idea for HS3 was announced without any real detail by George Osborne, Adonis said that Labour must make sure that the Tories don’t hijack the HS3 proposal, and that Labour should own the idea and promote it, and the ‘20 Miles More’ plan to integrate Liverpool into HS2, aggressively. ‘Aggressively’, we believe!

The whole thing seemed to be a love-in to promote Liverpools position for the ‘20 Miles More’ campaign, and Adonis proudly backed up the concept that Leese was running the show, saying that last year when Labour where considering a u-turn on HS2 that the assembled councils had ‘demonstrated their power’ and made sure the party stuck with HS2, or to put it another way, a handful of council leaders ignored all the polling both from Northerners and Labour voters, stamping their feet and demanding their train set, and in it undermining the Shadow Cabinet and holding the entire country to ransom.

The irony here of course is that whilst we all know that the announcement of Phase 2 of HS2 was rushed through to prop up the business case and bolster Birmingham City Council, who were about the only people supporting HS2 at the time, the publication of the Phase 2 route now looks like it is to be delayed for another year. The reality is that while Leese and co have been instrumental in keeping HS2 alive, there is a distinct possibility, especially if the proposal from Higgins to include Crewe in Phase went ahead, that a future Government may only ever get as far as building Phase 1, due to the costs keeping going up.

One delegate from Wakefield pointed out that ‘20 Miles More’ would cost £2bn more (their estimate, but it is likely this would be much more, especially to get a working solution into Liverpool Lime St as proposed) and asked about the communities which are losing, to which the Liverpool Mayor Joe Anderson responded that his job was to look after Liverpool, somewhat undermining the message of ‘us all being in it together’ which had come from Adonis.

At the ‘Moving HS2 forward: Connecting Cities to drive growth, jobs and prosperity’ fringe, the wheels rather started to come off when after seven speakers, the first round of applause came from someone questioning the need for HS2. Helped in part by people being able to submit questions via twitter, there were several questions about the costs, to which Shadow Rail Minister Lillian Greenwood replied as she had done at earlier fringes that we “Should have faith in our engineers to deliver n budget”, despite the appalling track record in that area and of course the massive cost escalation so far that puts the bill at £50 billion, and that is still on 2011 prices.

Like previous fringes, a question came in about the massive Carbon output of HS2, given the logarithmic relationship between speed and energy which means HS2 will need 3-4 times the electricity that current 125mph high speed trains use. Again the answer relied completely on not understanding the facts, saying that the alternative would be more flights, despite the fact HS2 only predicts a 1% modal shift from the air. This answers wasn’t as bad as the idea that Morocco will soon have more miles of high speed rail than the UK, which of course relies on the fact that we have had it since the 1970s as many lines meet the 124mph international definition of what counts as high speed rail.

Albert Bore, amongst others, was again peddling the idea that the WCML will ‘soon be full’, helpfully ignoring that capacity could be doubled on that line and that the ‘full trains’ (the 16.46 to Crewe is no longer ‘full’ because it has been lengthened) are the London Midland stopping trains, not the inter-city Virgin trains, which HS2 would seek to supersede. He also tried to claim that HS2 was about ‘providing connectivity across the Midlands’, which would be connecting a rail yard on the Nottinghamshire-Derbyshire, to a site two miles away from Birmingham Airport, to a site 15 minutes’ walk from New Street Station!

As always, the rhetoric included the dubious claims about jobs, which ignore all the international evidence showing that jobs will go to London, and at the very best jobs would not be created by HS2, but moved around the country to places which have stations.

When the question of whether they would chose the ‘One North’ proposals for Lancashire-Yorkshire rail projects instead of HS2, with the instruction that they were not to say ‘It’s not either/or’ as this is the standard answer, not one of the five councillors remaining at that point bothered to answer.

Finally, in her speech to Conference Floor, Mary Creagh said that Labour “Support HS2 which will transform our country, but there is no blank cheque so we must keep costs under control, and it will rebalance the economy.”

Clearly she hadn’t got the memo explaining that the HS2 Preparation Act was a blank cheque, the costs have kept spiralling and if it goes ahead, HS2 will continue to over-balance the economy. Though the one good thing is the get out clause of ‘the costs have gone up too much’ is still there for any potential Labour Chancellor. If he isn’t sat on by Richard Leese that is.

email
Tags: News
News
2 comments to “Got a question on HS2? Don’t go to a fringe, come to the Stop HS2 stall.”