Next Monday, 28th April, is the second reading and vote on the HS2 Phase 1 Hybrid Bill.

If you oppose HS2, it’s really important that you get in touch with your MP before the vote and tell them that you want them to vote against HS2.

The easiest way of emailing your MP is the tool at http://www.highspeedrail.org.uk/. This will suggest a wording for you, with some of the many different reasons why HS2 is a bad project for the country.

Another option is to use https://www.writetothem.com/.

Alternatively you can look up all their contact details on the Parliament website – http://www.parliament.uk/mps-lords-and-offices/mps/. As well as email addresses and the address of their constituency office, it also gives your MP’s phone number.

Twitter can also be a good way of getting in touch with an MP – two thirds of MPs have twitter accounts. If you have been joining in on the Stop HS2 selfie campaign, you could ‘tweet’ your picture to them by including their twitter ID in your tweet. 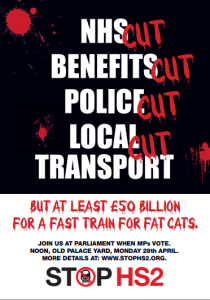 PS It’s also worth getting in touch with the other prospective candidates for MP. They will pass your views to their national party, and add to the pressure on MPs that way.

email
Tags: News
News
3 comments to “Ask your MP to vote against the Hybrid Bill”