This was originally published on HS2 the Regional Impact.  By Ian Waddell.

HS2 is, at £50bn plus, the largest single infrastructure investment in the UK’s history. Probably the most critical of the benefits currently claimed for HS2 centre around its potential role in regenerating the economies of large parts of the Midlands and the North.

In terms of an evidence base, these arguments tend to rely heavily on government commissioned research based on forecasts of future economic impact based on untested methodologies. These are naturally controversial, having been challenged by leading academics .

Nearly 30 years ago France became the first European country to invest in a high speed rail network – the TGV. If high speed rail can indeed play an important role in ‘rebalancing’ regional economies, then, after thirty years a study of French cities and their surrounding Departments and Regions should provide some clear evidence of this.

In considering which regeneration measures to apply, a longitudinal assessment of relative rates of unemployment over the thirty years seems arguably the most appropriate.

The first TGV lines connecting Paris with Lille, Lyon and Marseille
were established in the early 1980s. Therefore there should have been ample time for the regenerative impact of high speed rail to be reflected in observable relative improvements in the local and regional economies.

When considering Lille it is firstly crucial to remember that it is located at the cross roads of the European high speed rail network. It therefore benefits from high levels of accessibility and frequency of service.

Leading transport expert Roger Vickerman of Kent University observes:
“…. the biggest gains in accessibility accrue to the major access points to the network. These are first, the major metropolitan areas such as London or Paris, and secondly major interchange points, such as Lille or Lyon.”

The arrival of the TGV was accompanied by significant related invertment in local infrastructure. In 1983 by the opening of the VAL (Light automatic vehicle) the first driverless metro system in the world. In 1999 this was linked to Roubaix and Tourcoinq areas at that time the longest metro link in the world.

Lille has certainly seen a significant growth in jobs particularly as a result of the large Euralille development developed around the TGV station. The first phase of the Euralille development included offices, a large shopping centre, an hotel, a student hall of residence, a business school, a music venue, a Convention centre and a large urban park. Separate new housing developments were built in the vicinity of the project. The cost of the first phase of the project was estimated at around 5 billion francs (£500 million).

When all of these factors are taken into account Lille should have been ideally placed to show a dramatic increase in prosperity on the back of the TGV. The reality as evidenced by the unemployment figures produced by INSEE (the French National Institute of Statistics) shows that this has failed to materialise. Quite the reverse, relative unemployment has worsened in and around Lille since the TGV arrived. 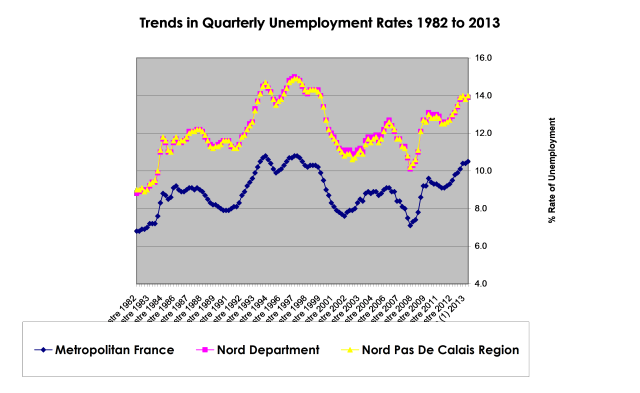 Unemployment trends 1982-2013 for the Department and Region within which Lille sits are given in the above graph Over the period, the difference in unemployment rates with the average for the rest of mainland (metropolitan) France has widened from around 2- 2.5% higher in 1982 to around 3.5% higher in 2013.

Latest figures for the much smaller Lille metropolitan area (taken as the employment zones (EZs) of Lille and Roubaix-Tourcoinq, the latter being by far the more poverty stricken) are only available from 1999. The latest Q3 2013 figures for these two areas are 11.5% and 15.7% ,1.0% and 5.2% respectively above the national average. In 1999 these figures were 1.4% and 3.9% which shows that central Lille appears to have benefited marginally whilst the poorer districts of Roubaix/Tourcoing have lost out.

The point is that, even with the sort of large scale investment that has happened in the ‘Euro-Lille’ complex, there has been no dramatic transformation of the economic fortunes of the area, as is implied by the claims of proponents of HS2, quite the reverse. The above figures (including those for the EZs) only serve to underline the findings of much academic research which shows that any ‘benefit’ is restricted to a small area of new investment on and around the stations and that, arguably, much of this has been displaced from less attractive locations elsewhere in the same region.

Turning to the case of Lyon, this is an area which has traditionally been amongst more prosperous parts of France. It has not suffered the depredations of the decline of traditional industries on anything like the same scale as the North East of France.

Nevertheless, if claims for the wider regenerative benefits of the TGV are to be believed, some further decline in absolute and relative levels of unemployment might be expected within the Rhone Department, over 75% of the population of which live within the Lyon area. 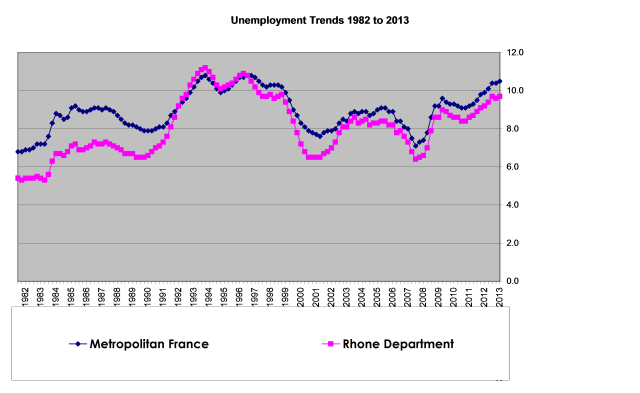 The picture for the region of Rhone Alps within which Lyon is located is similar. Its prosperity relative to the rest of France measured in terms of unemployment rates has actually remained unaltered (at 1.2% above the rate for mainland France) since the arrival of the TGV in the early 1980s.

In summary it seems clear from the French experience that high speed rail has had no discernible impact in reducing regional unemployment disparities. The only ‘benefits’ have been limited numbers of additional jobs at key locations close to stations and the evidence suggests that this may have been at least partly at the expense of investment displaced from poorer, less attractive parts of the same region.