This was originally published by the Inland Waterways Association (IWA) as part of a longer item on HS2. It has been reproduced with permission. Please note, the IWA doesn’t have a view either way over the HS2 proposals as a whole, only in how they will affect the inland waterways.

…Within Lichfield Branch area the main impacts on the canals are at Curdworth, Cappers Lane, Huddlesford-Streethay, and Woodend-Fradley.

At Curdworth (CFA Report 20 Curdworth to Middleton) the Birmingham & Fazeley Canal is crossed at a skew angle by a viaduct between Lock 5 (numbering down from the top) and Lock 6 at White Bridge.  This 350 metre long viaduct also crosses Marston Lane and the adjacent M42, with the section over the motorway, bizarrely, labelled on most of the maps as Birmingham and Fazeley Canal Viaduct No.1 (the canal crossing being No.2) !

The photograph shows the view down from Lock 4 by the Marston Lane maintenance yard to Lock 5 with Lock 6 and White Bridge in the distance.  It is instructive to compare this with the widely publicised photomontage of the viaduct with a High Speed Train crossing the canal, although this is shown just above Lock 5 and in its correct location the viaduct will be about 9 metres (30 ft) above the towpath.

However, knowing the width of the top of the lock (about 8 ft) it is obvious that the size of the train has been greatly distorted and reduced.  The carriages appear to be only about 6 ft high and less than 30 ft long, even allowing for the skew angle.  Whoever produced this image got their scaling seriously wrong and in reality the train will be at least twice the size shown !  It will therefore be travelling at least twice as fast as in the much publicised video sequence from which this image is taken, with correspondingly greater visual and noise impacts.

The detailed plans reveal other impacts on the canal here include the embankment beyond the viaduct, the end of which is close to Lock 6, a new access road on the offside of the canal by Locks 5 and 4, and two construction compounds adjacent to the canal by Locks 5 and 3.  The noise contour maps also show very high values around the viaduct, adding to the already intrusive noise from the M42.

At Cappers Lane (CFA Report 22 Whittington to Handsacre) the Lichfield Canal restoration (former Wyrley & Essington Canal) is crossed at a skew angle by a 250 metre long viaduct directly above the reinstated Cappers Lane Canal Bridge.  Although the height is ample for navigation, the elevation will exacerbate the noise and visual intrusion.  There are concerns about the exact location of the viaduct piers in relation to the towpath and about access to the Lichfield Cruising Club slipway which may need to be relocated. 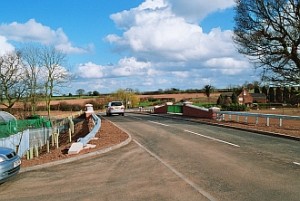 The end of the adjacent embankment and associated landscaping will permanently intrude on Lichfield Cruising Club’s offside moorings, and the loss of land and disruption to the moorings during the 18 month construction period is acknowledged in the report.  A construction compound will be close to the canal and a temporary haul road is shown crossing the un-restored section of canal between Lock 30 and the lift bridge.  Due to construction disturbance the residents of Canal Cottage at Cappers Lane may need to be temporarily re-housed.

A panoramic photomontage of a train on the viaduct above Cappers Lane gives an impression of its considerable visual impact, although the perspective again looks distorted and unconvincing.

The Huddlesford to Streethay section of the Coventry Canal (CFA 22) now enjoys a pleasant rural environment but the HS2 route will run on an embankment to the west, only 100 metres away near Steppingstones Bridge 84 (shown as Stoney Step Bridge on the HS2 plans !). 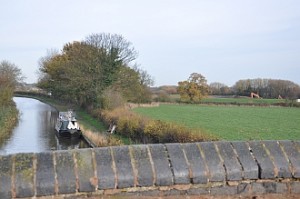 A surprise inclusion in the Draft ES is a “Potential Temporary Materials Stockpile” occupying a huge area of land on both sides of the canal between the existing railway bridge at Streethay and Huddlesford, a distance of about 1.3 km (0.8 miles), including the new Kings Orchard Marina which isn’t even shown on the plans.  Access for materials stockpiling would be from temporary railway sidings although there is no indication of how this would cross the canal.  Use of this area would last 5 or 6 years.

Worryingly, this and the other CFA reports admit that “the impact on the usage of the waterways has not yet been assessed” !

The Woodend to Fradley Junction section of the Trent & Mersey Canal (CFA 22) is one of the most damaging canal crossings nationally.  The ‘refined’ design (see above) still seriously affects the environment and heritage of the canal, especially the setting of Woodend Lock and cottage which are Listed Buildings within the canal Conservation Area.  The report admits that these would suffer ‘significant’ effects. (See January 2012 report below for photo.).

The view down the valley from the scenic and historically significant corner at Woodend, where the canal changes from an overall north-south to an east-west course, would be drastically changed by the proposed embankments and landscape planting.  Three construction compounds near the canal would be in use for 18 months whilst the embankments and 4 canal bridges (see above) are built.  Due to construction disturbance the moorings above Woodend Lock would be temporarily displaced and the residents of the lock cottage may need to be temporarily re-housed.

The line beyond Woodend cuts through Ravenshaw Wood and continues to run close to the canal for some distance towards Kings Bromley Wharf.

Alternative route alignments at Woodend including a tunnel under the canal (unlikely) or a diversion of the canal (worse than the present proposal) are apparently still being considered, as is Lichfield Branch’s proposal for an alternative alignment that would avoid the Phase 1 route crossing the canal at all.