Last week, the House of Lords Grand Committee met to discuss the HS2 Hybrid Bill, over two days to discuss amendments. The way Grand Committees work mean that everyone has to agree on amendments, if just one person present doesn’t want them, they fall. So basically besides the Government amendments to remedy mistakes in the bill, they all fell, but of course can be resubmitted when the Bill comes for third reading, now known to be on 31st January, with a report stage taking place on 24th January.

Despite the fact that the required unanimity means as a process the whole thing is pretty pointless, there was heated debate, with the points below coming on the first day, Tuesday 10th January.

The debate started off with an amendment to bring back plans to have a link to HS1, which had been dropped by Government. Lord Berkley revealed that this wasn’t actually necessary, as an electrified link track does actually exist, but it lacks signals as it was never used. Grandaddy of HS2 Lord Adonis then chipped in with a startling admission, that he had tried to get train operators to run Eurostar services to Birmingham back when he was SoS for transport, but no-one was interested unless a massive subsidy was there, and that HS1, that opponents say will happen with HS2, is carrying far fewer passengers than the forecast which was used to justify its’ construction predicted, saying:

“The economic case for running through services from Paris and Brussels to Birmingham, Manchester and Leeds is very weak indeed…..Although HS1 has been a great success in engineering terms and has played a useful part in linking two of Europe’s great cities, it is way off all the projections of traffic between London and the continent. I do not think it is yet even at half the level of the projections of what the traffic should have been…”

Baroness Randerson, who had brought the amendment for the HS1 link responded that it had been:

“Fundamental to the case for HS2. Plenty of people still think those links will happen. When you tell them that they will not, they are very disappointed.” 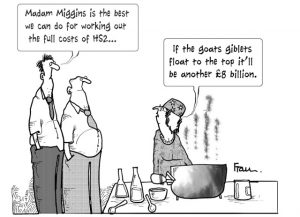 Lord Berkley then asked that construction of HS2 should not take place until the costs were updated, adding that he is very concerned about the costs and that the link from Euston to Old Oak common accounts for 34% of the cost of Phase 1. He stated that he had engaged a railway expert, Michael Byng who had re-estimated to cost of Phase 1 at £53.6 billion, about the same that Government say the entire project will cost, and that:

“I believe that HS2 has spent about £1 billion on consultancy since it started, but why have they not done any credible costings on it? It is a very complicated route, but why have they not done it. Noble Lords will be aware that the chairman of the House of Commons Treasury Select Committee, Andrew Tyrie, wrote to Chris Grayling in the last week or so asking why they had increased the passenger number estimate, and whether it was just to improve the business case. I have not seen any answer, but I expect there is one. If one is going to increase the capital cost by anything approaching the figure I have given, that does not do a lot of good for the business case, because it goes down the other way. What can be done, because I do want this to happen? The first thing is to get a credible estimate by independent experts.”

Berkley also listed a number of things he though unnecessary to the project, which could be cut to save money, before Lord Bradshaw added:

“The scheme as envisaged is extravagant, and this is not a time when we can afford extravagance.” and that: “I am happy to join the noble Lord, Lord Berkeley, in his call for independent costings, but there is also a need for re-evaluation of the economic basis on which the line is to be built.”

“Any member of the public sitting listening to the Committee will be asking themselves: “Why on earth are you going ahead with this project?”. All we have are problems, which seem to me almost insurmountable; we have no answers to them.”

“The Government tell us that the public have a right to require value for money, and I totally agree. The cost changes each time I see a figure, but £57 billion is the latest one, and no one with the slightest grasp of reality believes that it will stop there. This House, in the detailed report of the Economic Affairs Committee, chaired by my noble friend Lord Hollick, has already drawn attention to the need for a number of the central questions to be answered. Those questions were posed and not adequately answered by the Government’s very flimsy response in July 2005; nor do I believe they have been since, although I know the Minister said at Second Reading that he thought they had been. Where is the answer to a key question in that list, as to whether HS2 is the best way to spend £50 billion—although I up that now to £57 billion—to stimulate the UK economy?”

In response, Lord Ahmad said there was no need to review the costs because:

“Both the Public Accounts Committee of the other place and the National Audit Office, a body that already has a statutory function to examine proper allocation of public expenditure, have produced several publicly available reports on the costs of HS2. I am sure both bodies will continue to examine those costs as we move into the detailed design and construction stage and as more detailed costs information becomes available.”

This is of course despite the fact that both of these bodies have consistently been highly critical of HS2 costings.

There was further debate about tunnelling at Wendover and the replacement of ancient woodland before Government withdrew an amendment on traffic management, as reported earlier this week.

email
Tags: News
News
5 comments to ““Why on earth are you going ahead with this project?””