This article was posted today by campaigning website Enough’s Enough, and has been sent to all MPs.

Tomorrow MPs are due to vote on HS2.

With a current budget of £56billion, it’s the most expensive train line in the world, offering ‘abysmal value for money’.(1) 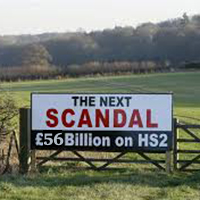 Earlier this month Conservative rebel MPs, Labour, the SNP and others showed they could work together by voting against Sunday trading laws, estimated to be worth +£1billion to the economy.

And there’s those disability cuts worth around £4.4billion over the next few years, now being rethought.

And now Hinkley Point, from which it’s estimated that HS2 demand will require around half a nuclear reactor’s worth of energy … 800MW.

Given the current climate, here are a few facts worth considering before voting on HS2 …

In summary, HS2 is ridiculously expensive, unfit for purpose and enormously destructive.

Please vote against HS2 and pursue a truly connected, less expensive and destructive solution to the UK’s rail needs.

We can do much better.