West and North Yorkshire Chamber of Commerce have issued a paper about plans for Leeds station and HS2.  They want Leeds station to be expanded to include the HS2 station, rather than having it on a separate site as is currently planned.

It’s clear they are aware of the underlying flaw in the HS2 proposals along its entire route: the way they it does not integrate well into the existing network. In addition they have concerns that travellers from some of the nearby towns – such as Harrogate, Skipton, Bradford and Wakefield – will spend too long travelling to the HS2 station. 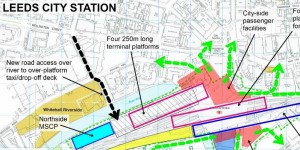 The Chamber says that as the existing Leeds station is already under pressure and in need of re-development and they want an expanded station to include HS2 and any future HS3/TransNorth rail on the same site.  They say it is “essential” to have HS2 and TransNorth “services running through and onto the East Coast Mainline towards Northeast England and Scotland”.

They admit that there are “significant operational, constructional and financial obstacles to be overcome” with their plans and that in places there will be “significant engineering challenges”.

Their plans, which are not costed, also involve making a number of other alterations in the area to allow for the rail services. Just like Greater Birmingham and Solihull Local Enterprise Partnership last week, they are asking for more money spent on the area and more non-HS2 infrastructure to make HS2 ‘work’ for the region.

And does the Chamber agree with proponents of HS2 like David Higgins who claim that HS2 is about the north? In the paper’s summary, the Chamber says

“The final station solution needs to acknowledge growth in existing rail services whilst ensuring that HS2 feels part of an integrated rail network, not one just facing to London and the South.”