A couple of weeks ago, when it was revealed that HS2 Ltd have concluded there is no business case for extending HS2 to Scotland, the Stop HS2 campaign suggested that Johnathan Edwards should be the first person the newly elected SNP MPs seek out on their arrival at Westminster. Mr Edwards, an MP for Plaid Cymru would seem a natural ally of the Scots Nationalists when it comes to HS2, as his analysis of the HS2 situation regarding Wales isn’t too dissimilar to how it would impact on Scotland, and indeed Northern Ireland.

This week, Edwards decided to take the initiative, insisting that the devolved powers should come together to fight for more money as a result of HS2 being an ‘England Only’ project. If HS2 were to be defined this way, or at least not of benefit to any of Wales, Scotland and Northern Ireland, then any such devolved parliament should qualify for additional funding under the Barnett formula.

After being told again, this time at parliamentary transport questions, that HS2 was a ‘UK-wide’ project, Edwards appealed for support from Scottish and Northern Irish politicians, saying:

“Any claims of a business case for HS2 that would benefit Wales has long been demolished by official KPMG figures showing that the project would wipe over £200m from the Welsh economy each year. Because HS2 will be funded from general taxation, taxpayers in Wales will pay for HS2 despite it undermining the Welsh economy.”

“It is clear that the Westminster government has no intention of extending HS2 to Scotland. This means that it is clearly an England-only railway, and if the UK’s funding mechanisms are to be applied correctly, this must result in a full and equitable share for the governments of Scotland, Wales and Northern Ireland to invest in their own countries’ transport infrastructure.”

“The moral case to me seems clear. If the Westminster government maintains its current position then I urge the national governments of Wales, Scotland and Northern Ireland to work together to demand fairness for our nations. The UK government needs to make a clear statement that this injustice will be rectified when the Comprehensive Spending Review is published, or face sustained pressure from Plaid Cymru and others who will continue to fight for a fair deal from this development.”

The entire argument that Wales would benefit from HS2 is based on the concept that people will be able to get on a train at Wrexham to the proposed HS2 station at Crewe (which still hasn’t been officially announced) and access the HS2 network that way, which seems a bit of a stretch to say the least. Additionally, it wasn’t just large areas of Wales which KPMG said would lose out from HS2, but Scotland and England too. Despite the insistence from Government that HS2 is a ‘UK-wide’ project, the KPMG report neglected to include any figures for Northern Ireland, either by mistake or design, as you would expect any figures for the province would have shown a projected drop in economic activity. For some reason, whilst KPMG included the Isle of Wight in their figures, they missed all the Scottish Islands, including North Ayrshire, half of which is of course on the mainland.

Trying to rope the SNP into the campaign for a Barnett pay out due to HS2 is an eminently sensible policy from Plaid Cymru, not just because it would add political clout, but also due to the way Barnett is calculated, there would be a bigger pay out for Wales if it were deemed that HS2 does not benefit Scotland.

The way the Barnett Formula works is quite complex, and it is quite difficult to get up to date figures on it too. In the case of HS2, you would take the cost of HS2 and multiply it by the ‘transport multiplier’, as there are several different multiplier figures, based on the level of devotion in that policy area. In Northern Ireland where rail travel is completely devolved the multiplier is 1, but in Wales it is only 73.1% (2010 formula).

How the Barnett would work with regard to HS2

Then you multiply this figure by the ‘population percentage’ as shown above. As such, the smaller the number you are dividing by at the end, the bigger the pay out. For example, Northern Ireland would get more money under this formula if HS2 were deemed an English project than they would if it were deemed to be of benefit to England, Scotland and Wales. 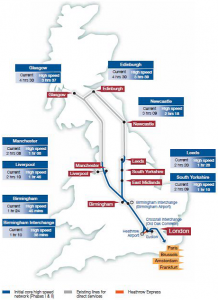 One of the original maps produced by HS2 Ltd. You can tell it’s an old one as it has links to Heathrow & HS1!

However, whilst the Welsh should at least have a case to say HS2 doesn’t benefit them and with Northern Ireland it should be an open and shut case, in Scotland it’s a bit trickier. As you can see from the map (and you can see it is an old map as it includes the now scrapped links to Heathrow and HS1 to the Chunnel), those promoting HS2 have tried to claim from the start that Scotland would benefit, with ‘classic compatible’ trains leaving the HS2 lines after Manchester and Leeds and carrying on to the Central Belt.

Of course what was proposed at the start quickly went out of the window. The original proposed time saving for London-Edinburgh journeys was 51 minutes, only one minute less than the 52 minutes saved on the London-Leeds journey, whilst London-Glasgow was 53 minutes. The problem with this was even back then it was widely accepted that once these classic compatible trains leave the HS2 track, they will not be able to go as fast as the current trains.

There was a revision of these estimates which now claim that London-Glasgow will only get a 30 minute saving, and London-Edinburgh 45 minutes. Closer inspection of the revised journey time savings shows that they have dropped, not because of a recalculation of the post-HS2 journey times, but because the time it takes currently to make those journeys had originally been over-stated by HS2 Ltd, a subsidiary of the Department for Transport as four and a half hours for both Scottish cities. 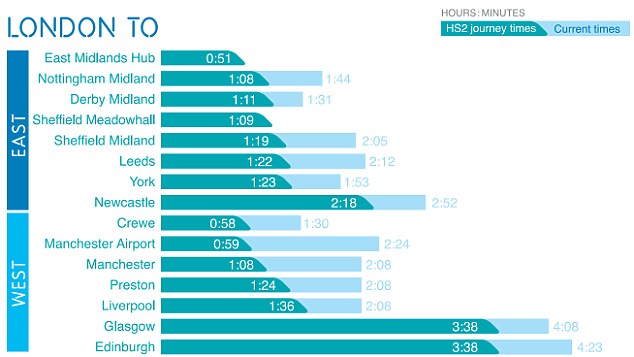 However, there is a much bigger problem than that. Whilst the idea put forward in the infamously exaggerated KMPG report that Aberdeen or Dundee could lose economic activity as a result of HS2 seems consistent with the idea that Cardiff, Cambridge or Cornwall would do too, KPMG stated that Glasgow which has always been meant to ‘benefit’ from reduced journey times, could lose up to £77m per year as a result of HS2 being built. In the Central Belt, it wasn’t just Glasgow which was projected to maybe lose out, but East Renfrewshire (£1.95m), East Dunbartonshire (£2.98m), West Dumbartonshire (£1.02m) and Falkirk (£17.61m) were also coloured in with red ink,  a potential annual hit of over £100m per year to those local economies. 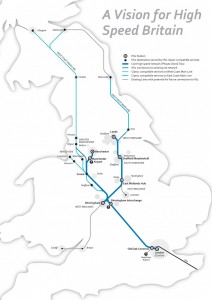 The current proposed map of HS2, which clearly shows that there wouldn’t even be ‘classic compatible’ services between Scotland and Newcastle.

If there were ever a piece of evidence to back up the phrase “Be careful what you wish for”, it is this, that a report largely discredited for doing everything it could to over-exaggerate the supposed benefits of HS2, Glasgow, a city which was always been supposed to be one of the HS2 ‘winners’ could take a hit as a result of HS2. Of course it’s not just Glasgow, as Liverpool could take an annual economic hit of £50m, despite the fact it’s always been on the HS2 ‘map’, if not the ‘core network’.

This shows the inherent problem for the SNP. For those not so hot on geography, it will only be when they look at these maps that they realise that Manchester and Leeds aren’t even halfway from London to Glasgow and Edinburgh, which shows that whatever figure you are looking for the overall cost of HS2, to get to Scotland you need to take that number and double it. This will certainly be the reason why the UK Government have reportedly come to the conclusion that there is no business case for the extension.

Again, when you look at the maps and proposed journey times, it has always been clear that whilst no physical tracks would be built in Scotland, the ‘benefits’ will be felt there with running-on trains, so there is no case for money to be paid out under Barnett. It doesn’t matter that these would be the same ‘benefits’ that most of the rest of the UK would feel, of having the economic life-blood sucked out of them by and increasingly vampiric London, as that seems to be the definition of a ‘UK-wide’ project.

email
Tags: News
News
One comment to “Why Scotland won’t get Barnett money from HS2.”