This was originally published on HS2 and the Enviroment.

When the 2010-2015 Parliament was dissolved on Monday 31st March the HS2 Select Committee ceased to exist. It will however be reborn, like a phoenix from the ashes of its predecessor, once the House of Commons resumes normal business following the 2015 general election. With one exception, we can expect to see the same faces sitting at the U-shaped table in Committee Room 5. That exception, as I forecast in my blog Welcome to another fun-packed year in HS2 Land, part 1 (posted 2 Jan 2015), is Mike Thornton, who failed to convince his constituents in Eastleigh to re-elect him.

The empty chair at the Committee’s table would appear to leave the business managers of the House of Commons with three options:

The first option is perhaps the simplest and avoids introducing a new Member who has not had the benefit of the many hours of evidence already heard. It would, however, increase the work pressure on the remaining five Members, who might also struggle on some occasions to achieve the quorum of three necessary for the Committee to sit.

Appointing a replacement Liberal Democrat would leave the political balance of the Committee unchanged. However, the representation on Commons committees is supposed broadly to reflect the strength of parties in the House, and there is surely a question of whether the severely diminished ranks on the Liberal Democrat benches continue to justify having representation on the HS2 Select Committee. It may also be that the pool of Liberal Democrat MPs may prove to be an insufficient resource to allow one Member to devote hour after hour to serving the Committee.

If a new member is to be appointed from another party then the obvious choice, based upon strength of seats held in the new Commons, would be the Scottish National Party. However, although HS2 has considerable implications for Scotland, the building of Phase 1 may be viewed by some as an English matter, and getting the Scot Nats involved could be controversial for this reason.

The new Parliament will assemble on 18th May for two days to allow Members to be sworn in and elect the Speaker, but business will not really get underway until the Queen’s Speech is delivered by Her Majesty on Wednesday 27th May, and then debated. At some stage, the House of Commons will renominate the Members of the HS2 Select Committee, including deciding on any replacement for Mr Thornton.

No plans have yet been published for the reconstituted Committee to resume public evidence sessions, but my understanding is that these are unlikely to commence until early June.

In my blog Checking the score (posted 29 Dec 2014) I reproduced a calendar summarising the business of the HS2 Select Committee during the year 2014. A similar calendar for 2015 is shown below. 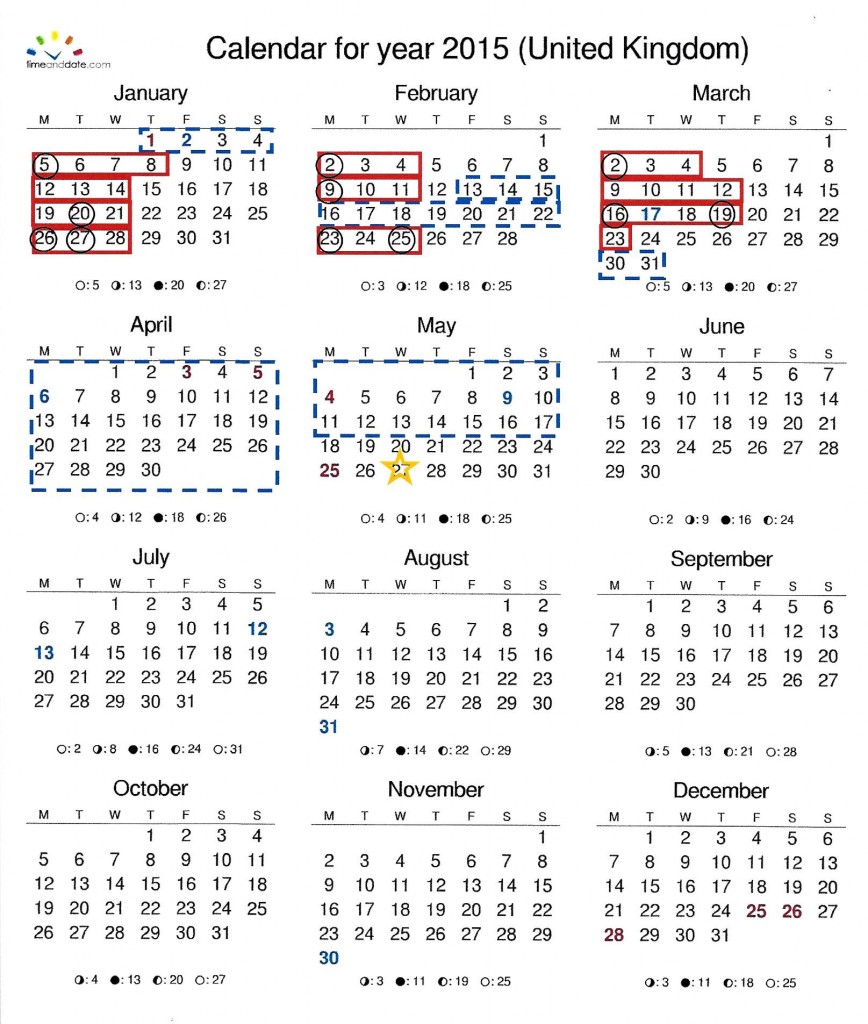 As was the case in the 2014 calendar, the dates surrounded by blue dotted lines fall within recess periods. I have only been able to show these up to the end of the break for the general election, as it will be for the incoming government to decide the recess dates for the 2015-16 session. Based upon recent practice though, we can expect MPs to vacate Westminster for the last two weeks of July and all of August, returning at the beginning of September for a short session before again vacating SW1A for about four weeks for the party conference season. Two further recesses are likely to be scheduled before the end of the year: a week’s break in November, and the Christmas break taking a further two weeks out of the days available for business in 2015.

Assuming that the Select Committee follows the same pattern as it did for June to December last year, which was to follow the prescribed recesses with the single exception of the first week of the party conference break, my estimate is that there are nineteen weeks available for it to sit in the remainder of 2015.

As I did for the 2014 calendar, I have encased days on which the Committee was scheduled to hear petitions in solid red lines; these amounted to 34 days up to the date of dissolution. Dates that I have circled in black are days on which not all of the scheduled sessions took place.

If last year’s business is also taken into account, up to the dissolution of the 2010-2015 Parliament there have been 140 sessions, morning afternoon or evening, scheduled to take place, and petitions were actually heard on 101 of these scheduled sessions, so 39 sessions were “lost”. By my count, 373 petitions have actually been heard, and a further 134 have been scheduled to be heard but the petitioners have not appeared before the Select Committee – these 134 are the main reason why committee sessions have been cancelled on the day, or at short notice.

In Checking the score I discussed the difficulty of arriving at a figure for the total number of petitions that have been “dealt with” for the purposes of the hybrid bill process, since some petitions may be withdrawn before being scheduled and some petitioners who have deferred to allow negotiations with HS2 Ltd to take place may, nevertheless, find it necessary to appear before the Committee at some future stage. In addition, some petitions that have been heard by the Committee may require further intervention by the Committee and this could involve an additional appearance by the petitioner, although it is expected that any such intervention will generally be by correspondence.

Since the promised “list of petitioners who have withdrawn” that I referred to in Checking the scorehas, as far as I can see, failed to materialise on Parliament’s website, I have no better information on petitions that have been withdrawn without being scheduled than was provided by the list that was made available to the Rt Hon Cheryl Gillan MP in a House of Commons written answer; this answer has enabled me to identify five such petitions.

So my estimate of the number of petitions dispensed with by the 2010-2015 Parliament, which is probably an underestimate, can be derived from the sum of 373 heard, 134 scheduled but not heard and 5 withdrawn without being scheduled; a grand total of 512. This is the product of 77 scheduled days of hearings, so the average rate is 6.65 petitions per scheduled day. The calculation that I made on the same basis in Checking the score for the rate at the end of 2014 yields a rate of 3.72 petitions per scheduled day, so the Committee has significantly increased its rate of dealing with petitions, and I can only expect a further speeding up as the business moves to the Chilterns where many petitions share common themes, and even common words.

Notwithstanding, if for convenience we assume that the Select Committee at least maintains the current rate of dispensing with petitions, then where will the process have reached by the end of this current year? Based upon the 19 weeks that I speculated above will remain available for the Committee to sit in 2015, and assuming that the Committee is scheduled to sit four days a week – something that has not regularly been achieved – then the 76 sitting days remaining available this year will allow a further five hundred petitions to be disposed of, making the putative total at the end of the year around one thousand.

Depending upon the amount of extra committee business that arises from additional petitions, it would appear that the Select Committee is currently on schedule to finish its task by the end of 2016.

Footnote: So about 28% of scheduled sessions have been lost, overall. In Checking the score I reported that the equivalent figure for all sessions scheduled in 2014 was about 36%, so the process is becoming steadily more efficient.

Acknowledgement: The background calendar for the image that I have used to illustrate this blog was generated on www.timeanddate.com/calendar.