It is generally accepted that political parties produce manifestos in the run up to elections because they want voters to take them seriously. Well that is how it is meant to work, but it’s questionable whether or not anyone told whoever wrote the manifesto for the Liberal Democrats. It’s not quite the Monster Raving Loony Party, who want to build HS2 to the Falkland Islands as the current proposal is neither expensive enough or daft enough, but it is getting there.

“Support options for a new intercity cycleway along the HS2 route within the overall budget of the project.” 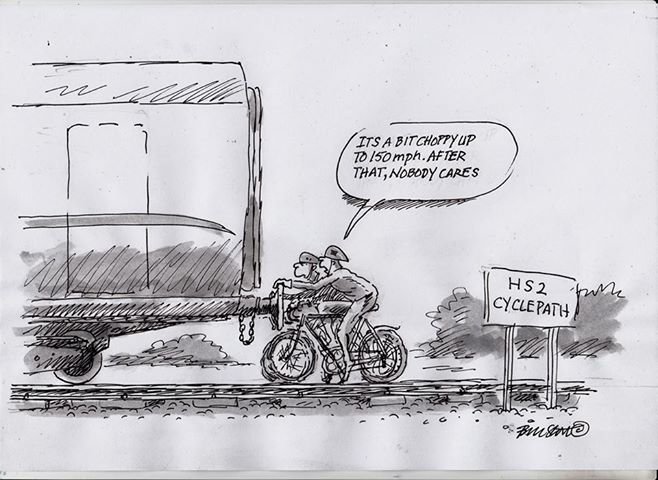 Now that may sound like a laudable aim, but we’re just not sure it has been completely thought through.

While a cycle path might give something back to communities blighted by HS2, there is a big question, with the noise of a train going past every 100 seconds at 250mph, who the hell is going to want to use it? Also, it is quite likely that a 250mph train is going to cause, shall we say, a bit of a draught, not something that really works well with a nice bike ride in the country.

Of course the worst part of the statement is the idea that this could be provided “Within the overall budget of the project”, i.e. that it would cost nothing. Whilst Sir David Higgins has come into HS2 Ltd and found a way to cut bits off without reducing the cost of the project, we are not so sure he could add new bits without the cost moving upwards.

This pledge does make you wonder about the people who wrote the manifesto and their grip on reality, in their belief that 351 miles of tarmac, and of course the extra land required to put it on would cost nothing, to say nothing of what exactly is meant to happen when HS2 goes into tunnels.

The other mention of HS2 is of course a nice bit of spin for north of the border, that they will:

“Proceed with HS2, as the first stage of a high-speed rail network to Scotland.”