On 12th January 2015, history was made in Committee Room 5, when nine year old Alexander Rukin at nine years old became the youngest person to appear in an official capacity in Parliament. The reason for that of course is that unless you were Edward VI, a Hybrid Bill were anyone who is affected by the Bill can petition, is the only time someone that young would have the chance to appear.

Now while there have obviously been some detractors, most notably from the expected sources on twitter, that he was put up to it, all I can say those people don’t know him very well. Well, they don’t know him at all. Alex is just one of those kids who always wants to help. One of his favourite jobs in the past has been leafleting, which by each of us taking one side of a road becomes a race. And this may come as a surprise to some, but I actually talk to him. As such, he very much understands the impacts of HS2 locally, especially on places like Crackley Woods and the Kenilworth Greenway, and every time news comes over the radio or on the TV about more cuts to things he sees as important, he has one point to make; “Why is that being cut while all that money is being spent on HS2?”

So with that in mind, when petitioning came along and what it was had been explained, Alex had one question “Can I do that?”, so after finding out that there was no age limit, the answer was yes. With the added bonus that this would mean a day off school, there was no question he would do it, and we decided on making a video (which has got over a thousand new views this week) to encourage others to petition, as it was the nearest we could get to his request of “Dad, you are always on telly, when can I be on telly?”. 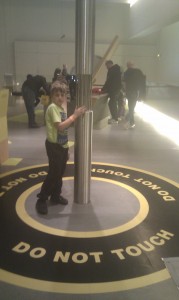 Alex takes a predictable course of action at the Science Museum.

We set up the appearance for first thing on Monday, as I didn’t want to drag him down to London just to do the hearing. With the committee not meeting on Fridays, this was the only way to include a weekend, which meant a trip to the Science Museum, where special interest was taken in a moral quiz which involved running people over with a runaway rail wagon, and then on to an all you can eat Chinese Buffet in Camden.

In the morning, the only question Alex had was whether he would go into the Guinness Book of Records. I couldn’t answer that question, especially given the fact boys younger than him have entered petitions, though whether they would still be younger on the date of their appearances (if they appear) is the question. I told him that whatever happens in the future, like Neil Armstrong or Tenzing & Hilary, he will always be the first child to have appeared in Parliament.

The idea was that the hearing would be fine, because we would have prepared, but the reality was the script for the day was only printed out about an hour before we went on. That didn’t matter as 95% of it consisted of things Alex had already said, the key was getting it all in a sensible order that flowed and followed the order of the evidence we had sent in. We practiced it once on the tube on the way in. As we changed at Embankment, possibly the politician most appropriate to the situation, one remembered for his conference address as a youngster, William Hague MP got onto the train with us. Given the reason for our visit, I thought better of approaching him to give Alex a pep talk, but took his appearance as some form of omen that everything would be just fine. 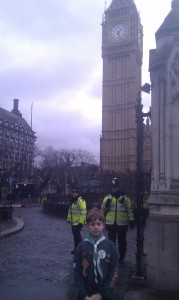 Half an hour before appearing in front of the committee, Alex arrives at Parliament.

In the morning, the media requests had started coming in. Contrary to the handful of naysayers who have labelled the whole exercise a ‘cynical media stunt’, the majority of them were turned down. In fact, the phone got turned off. I agreed only to meet the always friendly Alison MacKenzie of Central News, the perfect reporter for the situation, who would be flanked by a single photographer from the PA. Watching the coverage on Central, I really, really need to lose weight and should have made sure my shirt was tucked in, but no-one was looking at me anyway.

When Alex had asked what Parliament was like, the obvious answer to contextualise it for him was to say it “Looks a bit like Hogwarts”, with his reply being “But for naughty muggles?”.  This removed any chance that the Great Hall might intimidate him, as he immediately identified it as being like the fictional schools dining hall, just without the tables and chairs. In his opinion, Parliament also has fewer paintings, more statues, and the stairs don’t move, probably because they are too heavy.

Whatsapp
Tags: News
News
3 comments to “A big day for a little lad. Part One.”