Before going in to the room, committee chair Robert Syms MP sought out Alex to introduce himself to put Alex at ease, and assure him they wouldn’t ask difficult questions. I can’t adequately describe the gesture he made when I told Alex he was meant to be the one he should look at when talking, but let’s say it was appropriate for the situation! Even Tim Mould QC was jovial when he came over and I introduced him as ‘one of the baddies’, though James Strachan QC who would actually be representing HS2 Ltd didn’t seem to take that comment as light heartedly.

In the room itself, events conspired to help out. Nerves, which are natural for anyone in this situation, let alone a nine year old, had started to set in a little. The committee were one short of quorum, so could not start for ten minutes, and when they did Alistair Lewis had come in to make a statement on behalf of Warwickshire County Council. That delay helped calm things down, and then we were on.

Apart from Alex leaning on his hands to start with, the appearance went perfectly. Alex was so comfortable with the script, as it consisted completely of his own opinions, that most of the time he was able to answer the questions without referring to it. In fact the only mistake was mine. I had meant to ask him a second maths question; “If the official costs without the contingency are £15.7bn and the figures HS2 Ltd gave you make it £7bn, how far are they out?”, but the fact I had messed up the script didn’t phase him at all. If I weren’t pointing it out now, no-one would even know.

In trying to respond to that point Alex made, James Strachan tried to excuse the fact the costs were £8.7bn were out by saying, quite rightly, that they had used the contingency figure for Phases 1 & 2 of £14.4bn. The thing was, this had been put against the total cost for Phase 1, so while the £14.4bn is a ‘correct’ figure, it wasn’t the correct figure in the scenario which it was used, so it was quote right to say they were £8.7bn out.

Most of the evidence was based on the Promoters Response Document which HS2 Ltd had sent as a response to the issues Alex had raised in his petition. Believe it or not, being £8.7bn out on the costs from Phase 1 of HS2 wasn’t the most laughable thing. That was all about ancient woodlands in the area, and most notably Crackley Woods. In one part of the PRD, HS2 Ltd said they hadn’t surveyed Crackley Woods as they couldn’t get access. This, probably more than anything that has gone before, convinced Alex of the complete and utter incompetence of HS2 Ltd:

“I’ve been told in Parliament you are not allowed to say people are lying, so I’ll just have to say they haven’t been there. It is a public wood. Everyone I know at school has been there.” The fact HS2 Ltd couldn’t get into a public woodland however didn’t matter as their document said there would be ‘no effect’ on it. Well on one page it did. On another page it said there would be a ‘significant adverse effect’ to Crackley Woods. Bizarrely, in attempting to show HS2 Ltd were competent, Strachan pointed to a document which said HS2 would have a ‘moderate adverse effect’ on the woodland. So we had come in complaining that there were two contradictory assessments of Crackley Woods, and just to prove our point, HS2 Ltd helpfully found a third! 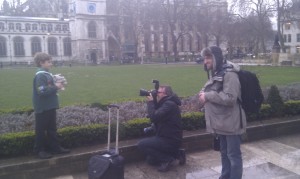 Alex Rukin posing for Photos after appearing in Parliament.

So, everything at committee went fine, it was when we left Committee Room 5 that things got hectic. While we thought there might be some press interest, we didn’t expect there to be five journalists stood there waiting, notebooks in hand. By the time we got outside and there were another three waiting, it was all getting a bit too much and Alex was answering the questions with one-word answers, though he was quite happy to pose for photos, even in the rain. Although he’d had enough of the interviews, when I said people wanted him to go in to a TV studio, he leapt at the chance. His only concern was that I would be with him. So after a cup of tea and a bit of a warm, we were off down Millbank to Russia Today. Walking into the studio there was a loop of his video playing on the big screen. “Wow!” was the word. 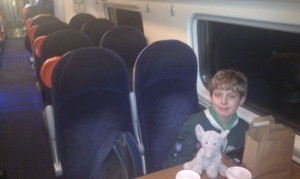 Alexander Rukin is not convinced by the argument that HS2 is needed for capacity reasons.

Everyone there not only put Alex at ease, but they also laid on a taxi back to Camden. There was a final radio interview on speakerphone before getting off home. We got the 7.23, the second train after peak hours ended with Alex running along the platform with the instructions ‘find the first pair of seats that are not reserved’. That was a bit of a waste of time, as let’s just say after sitting down in the very first set of seats in the carriage, Alex was not convinced by the argument that HS2 is needed for capacity reasons!