This was originally published on South Heath against HS2 – you can view it here. 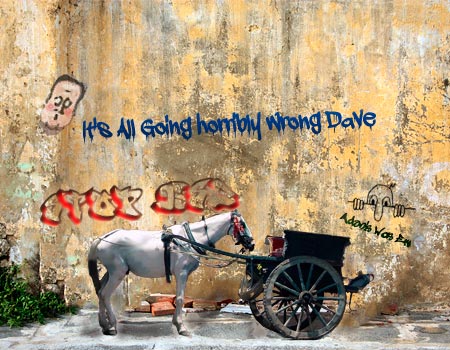 Increasingly HS2 looks like a cart-before-horse debacle, where the weak evidence that the high speed rail link is actually needed at all, comes some time after the government’s commitment to build it.

From the outset the figures produced in support of HS2, looked to many to be as ‘stitched up’ as the dodgy dossier of Cameron’s predecessor. It doesn’t help matters that the public is constantly being served up a diet of spin and nonsense, about transforming the north and such twaddle, in order to sway us.

Sold initially as a ‘need for speed’, the line had to go ‘straight through the Chilterns’, yet we soon discovered that it was allowed to curve around the Chancellor’s constituency. Unfortunately for the government, the general public were not at all convinced that a few minutes saved from Birmingham was worth the massive investment.

Then it was ‘all change’ in the boardroom, time to rewrite the script. We were assured that actually it wasn’t about ‘speed’ at all, but rather ‘capacity’ was the real reason for building HS2. So, after much partisan analysis, another tranche of disputed statistics were produced, in what was dubbed by some “the best piece of fiction since Ulysses”.

Now we hear that no less than Environmental Audit Select Committee is about to release a report, casting serious doubts over the electricity consumption and carbon footprint figures that have been used to date. The suggestion is that the High Speed train may have to travel a lot slower than published to satisfy environmental issues.

Most people unsurprisingly wonder what the heck is going on and just why HS2 is so important that Cameron would risk support in his political heartlands to fight for it. Is it that he has a genuine belief in the ever-changing facts that support it? Or is there another stronger reason for his constant cheerleading?

Frankly, we are all rather puzzled about HS2, many people think that it may be tied up with European commitments, others that it is corporate welfare for a struggling construction industry, some even think there is something at work here that we haven’t even thought of yet.

The only sure fact about HS2, is that it is costing the nation a small fortune, whatever the outcome and there is little sign that government is listening to its critics. Perhaps once they have listened to the EASC they might be forced into a rethink!

email
Tags: News
News
One comment to “HS2, The Cart Before The Horse”