In the week since the IEA criticised vested interest groups as being the only ones supporting HS2, surprise surprise, a host of vested interest groups have crawled out of the woodwork to defend HS2.  Key findings from the IEA report “The High-Speed Gravy Train: Special Interests, Transport Policy and Government Spending” included:

“A group of powerful special interests appears to have had a disproportionate influence on the government’s decision to build HS2. The high-speed-rail lobby includes engineering firms likely to receive contracts to build the infrastructure and trains for HS2, as well as senior officials of the local authorities and transport bureaucracies that expect to benefit from the new line. An effective lobbying campaign in favour of HS2 was initiated and funded by concentrated interests expecting to make economic gains from the project. This effort appears to have been effective at marshalling support for the scheme among policymakers”

First out of the blocks was Jerry Blackett of Birmingham Chamber of Commerce Group, who said there was “No account given to the disastrous results of not building HS2.” Blackett has become used to having to defend HS2 recently, most notably saying that “Business leaders in Birmingham reiterate their support for HS2”, following a survey which saw two thirds of businesses in the city were against HS2. Blackett is surely busy copying and pasting this statement, ready to rebut another bad news story which is due out tomorrow. 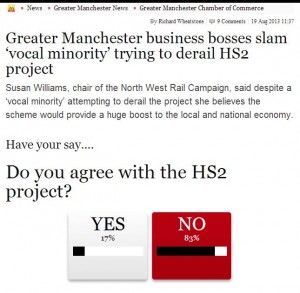 It seems that 83% is what counts as a ‘vocal minority’

The North West Rail Campaign, which is based at Manchester Airport were quite willing to ignore the facts in spectacular fashion, with their chair Susan Williams, a former leader of Trafford Council (Manchester Airport is in Trafford) claiming it was only a ‘vocal minority’ who opposed the scheme. Her problem was that the article in the Manchester Evening News came with a poll, which at the last count showed 83% of respondents were opposed to HS2.

Without realising the irony that they could be talking about their own documents, HS2 Ltd issued a statement which claimed: “The IEA report is extremely speculative and completely lacking in concrete facts.”

“The fact is HS2 is absolutely vital for this country. Without it the key rail routes connecting London, the Midlands and the North will be overwhelmed. This report does nothing to challenge these undeniable facts.”

Of course the facts of the matter are that rail use dropped over the last year and alternatives are on the table which deliver capacity increased more quickly and cheaply. But while those supporting HS2 found it easy to dismiss the IEA and their £80bn figure it became harder when Treasury officials were reported to be using £73bn. Then, former Chancellor Alistair Darling came out [again] against the project. When that happened, Lord Adonis who came up with the HS2 plans had to be wheeled out, along with Conservative MP Andrew Smith, who for some reason neglected to mention in his Conservative Home blog that the PR firm he is a consultant at has amongst its clients the Passenger Transport Executive Group.

Now we are at the stage where Pete Waterman, the train spotting record producer who has been put on the HS2 Growth Taskforce has been wheeled out.

Nothing says ‘desperate’ more than that.

email
Tags: News
News
19 comments to “Is anyone without a vested interest willing to stand up for HS2?”